LAS VEGAS (AP) — After initially denying reports about Robin Lehner undergoing season-ending surgery and the goaltender dressing as the Vegas Golden Knights backup, the team said he will have a shoulder operation after all.

The Golden Knights announced Monday that Lehner would undergo surgery to repair a left shoulder injury he suffered Feb. 9. He initially rehabbed and was able to return to play March 1, but Lehner was not 100% healthy down the stretch while the team’s playoff hopes faded and the decision was made for him to have it taken care of.

The team said in a statement Lehner “has done his best to battle through this injury.” It’s the same shoulder he had cleanup surgery on in October 2020.

Coach Peter DeBoer last week denied reports Lehner was having surgery, saying he expected the 30-year-old Swede to be in uniform Sunday night against San Jose. Lehner backed up Logan Thompson, who allowed two goals to the Sharks in the final 2:06 of regulation on the way to a stunning 5-4 shootout loss that makes it incredibly unlikely for Vegas to qualify for the playoffs.

The Golden Knights have three games remaining and may need to win out to get in. On Tuesday night, they host the Dallas Stars, who are just ahead of them in the standings.

Lehner finishes the season with a 23-17-2 record with a 2.83 goals-against average and a .907 save percentage. Vegas recalled goalie Jiri Patera from the American Hockey League’s Henderson Silver Knights to fill Lehner’s spot on the roster. 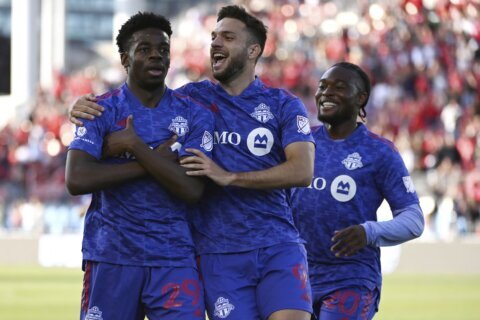