Column: Scheffler’s desire to compete takes him to the top

AUSTIN, Texas (AP) — Scottie Scheffler only ever wanted to play. That started with watching.

Six years before Scheffler won the Dell Technologies Match Play to become the No. 1 player in the world, he felt lucky just to get tickets to Austin Country Club during his sophomore year at Texas, the toughest of his four years in college.

Even then, there was a purpose.

“I would always try to watch somebody,” Scheffler said. “I remember watching Rory (McIlroy) hit balls on the range, and I remember hearing the noise that his club head hitting the ball made and being taken aback. Like, ‘Wow, this was hit really solid.’

“I just remember watching and kind of studying those guys and just seeing what I could learn, because there’s so many talented guys out here and there’s so much I can learn from them that any tidbit I could pick up on was going to be beneficial.”

Randy Smith has seen all this before.

Smith, the PGA Hall of Fame pro at Royal Oaks in Dallas, has worked with 10 juniors who went on to play on the PGA Tour. Scheffler was 6 when his family moved from New Jersey and joined Royal Oaks, and Smith can still remember a boy small enough to hide in a trash can.

Mostly, he remembers how he wanted to hang around the pros.

“I’m not talking run-of-the-mill mini-tour pros,” Smith said Sunday evening. “He was always up there around the tour pros when he was 8, 9, 10 years old. And it was hilarious. He would just sit there like a sponge. He’d sit over with a shag bag, and then he’d go off and try it himself. He was jacking around with these guys, challenging them to chip and putt and compete.”

A winner at every level, Scheffler experienced his low point during his sophomore year at Texas when a growth spurt in high school — now at 6-foot-4, he would have trouble hiding in a dumpster — caught up with him. His arms were suddenly longer. There were back injuries.

After being named NCAA freshman of the year, his only top 10 was finishing ninth in the Big 12 Championship. He struggled to get the ball in play. Scheffler described it as a long year.

Through it all, Scheffler never lost the feel in his hands or the creativity between the ears — two of his greatest attributes — or the desire to compete.

“Give him a left-handed set of clubs and he’ll figure out a way to beat you,” Smith said.

It was always about a chance to compete, without contemplating where it might lead even as he piled up trophies in junior golf, college and now at the highest level. It’s not that Scheffler didn’t think he was capable of being No. 1 in the world. He just never looks beyond the next shot, the next round, the next tournament.

“It’s not something that I didn’t want to achieve or didn’t believe that I could do,” Scheffler said. “I grew up at Royal Oaks. I grew up wearing long pants to go practice because I wanted to be a professional golfer. I dreamed of being out here.”

Not winning until his 60th start as a PGA Tour member didn’t bother him as much as one might think. He was competing, and there was great joy in that alone.

And then he won three times over the last six weeks, reached No. 1 in the world and his head was spinning trying to take it all in. Scheffler didn’t even realize the top ranking was at stake until Saturday.

That only added to a moment big enough to elicit rare emotion from Scheffler after he won. He was wiping away tears after so many hugs with wife Meredith, his parents, in-laws, sisters and friends. There was one particularly poignant moment with his father, Scott.

“You’re pretty good at golf, man,” he told his 25-year-old son. “I’m more proud of who you are than your golf. You’re a wonderful young man.”

Making it even sweeter was winning in Austin, where Scheffler earned a degree from the McCombs School of Business in four years without summer school (he works hard in the library, too). He considered it a hometown win. And it was redemption from last year, when he was runner-up in the Match Play.

“I never really got that far in my dreams,” Scheffler said at the trophy presentation, choking up again. “I just love to play golf. I love competing. I’m happy to be out here, you know?”

Smith was with him in Austin at the start of the Match Play and then returned home. He is always working, usually with juniors no bigger than Scheffler once was. He still recalls the boy sitting on the Royal Oaks range, soaking up shots and picturing himself doing the same.

“It’s not watching the last six weeks, it’s the last 18 years,” Smith said. “We can talk a lot about golf swings and all this and all that. But he’s got the brain to carry it. He could really be something special.”

Going green: IndyCar to use renewable fuel beginning in 2023 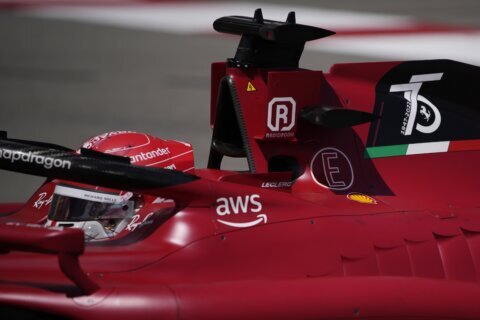