BERLIN (AP) — The Bundesliga will have full stadiums for the first time in months this weekend as coronavirus restrictions are scrapped across Germany in time for the season finale.

Union Berlin has sold all 22,012 tickets for its home game against Cologne on Friday. Borussia Dortmund will host Leipzig in a sell-out Westfalenstadion on Saturday.

“We’re looking forward to 81,365 spectators in the most beautiful stadium in the world,” Dortmund said on its website.

Next week, Bayern Munich is hoping for a capacity 75,000 crowd for its derby against Bavarian rival Augsburg on April 9. The league leaders are playing at fifth-place Freiburg this weekend.

“The fans are the essence of soccer and make the games in our stadium something unique, especially now in the decisive phase of the season,” Bayern deputy chairman Jan-Christian Dreesen said after Bavaria’s cabinet on Tuesday agreed to drop restrictions from Sunday per national guidelines.

Face masks are also being scrapped and will no longer be mandatory at games.

Thursday is the last day of restrictions in Berlin, giving Union its long-hoped for return to full capacity. The club had positioned itself against keeping fans away from games as a measure against COVID-19 infections.

Now, finally, others agree, despite stubbornly high infection rates persisting across the country.

Germany registered 274,901 new coronavirus cases over the previous 24 hours on Thursday, when the seven-day rate of infections stood at 1,625.1 per 100,000 inhabitants. There were 279 deaths related to infections, bringing Germany’s total to nearly 130,000 since the start of the pandemic.

The last time Union was able to host a full stadium was on Nov. 20 for the 2-0 derby win over Hertha Berlin. Bayern’s last sold-out game was against Freiburg on Nov. 6.

The Bavarian powerhouse is six points ahead of Borussia Dortmund and closing in on a record extending 10th consecutive league title with seven games remaining.

If Dortmund drops points against Leipzig on Saturday, or against Stuttgart or Wolfsburg in its subsequent games, Bayern could potentially win the Bundesliga title when it plays Dortmund in Munich on April 23.

There is arguably more excitement at the other end of the standings with three teams — Hertha Berlin, Augsburg and Stuttgart — all level with 26 points. Last-place Greuther Fürth is 11 points behind the three before its visit to Eintracht Frankfurt on Saturday.

Hertha coach Felix Magath has recovered from his coronavirus infection and will be able to take charge for the first time after missing his debut against Hoffenheim before the international break. Hertha’s 3-0 win under replacement Mark Fotheringham was the team’s first of the year and it ended a run of nine games without a win.

Augsburg has played a game less than its rivals. It hosts Wolfsburg on Sunday, then Mainz for their coronavirus-postponed game on Wednesday, before facing Bayern next weekend. 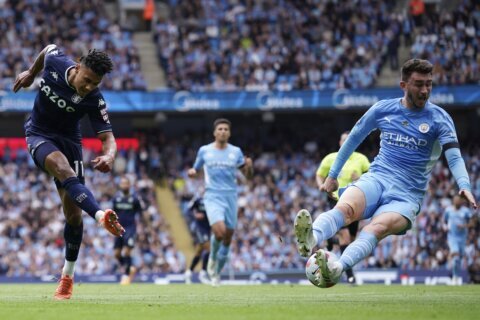 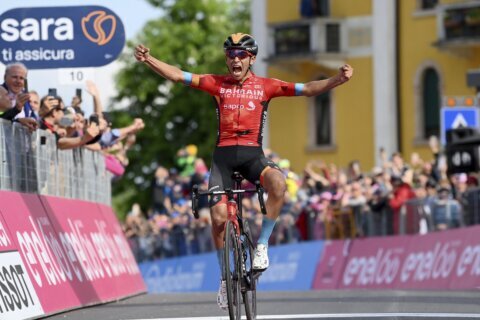