BARCELONA, Spain (AP) — Atlético Madrid extended its hot streak with a 1-0 win at Rayo Vallecano in the Spanish league after Koke Resurrección scored the second-half winner in Saturday’s capital derby.

After an international break, Atlético will play Alavés before starting its quarterfinal matchup in the Champions League against Pep Guardiola’s Manchester City on April 5.

Defending champion Atlético’s sixth win in seven matches overall lifted it ahead of Barcelona into third place, and just two points behind Sevilla in second. League leader Real Madrid is 12 points ahead of Atlético before it hosts Barcelona on Sunday in an eagerly awaited “clásico”.

Diego Simeone repeated his lineup from Tuesday’s 1-0 win at Old Trafford that ousted Manchester United from the Champions League 2-1 on aggregate in the round of 16.

After constantly tweaking the lineup as his team struggled at times this season, Simeone appears to have found his preferred starting 11 with Antoine Griezmann and João Félix in attack and Luis Suárez as a reserve.

Griezmann and Félix combined three times early on to create chances as Rayo’s defense held on. The hosts responded with pressure and a high-pace attack that managed to rattle the more talented visitors through the rest of the first half.

But when Félix linked up with Koke in the 49th minute, the resistance collapsed. After receiving the ball in the box, Koke passed it back for Félix arriving in a second wave. The Portugal forward slid the ball right back to meet Koke’s move around his marker, and the Spain midfielder did the rest by slotting his shot inside the far post.

“I think we have made this click,” Koke said. “We have increased our intensity and our concentration and that is why we are on this run. (We have improved) both in defense and attack. We are keeping clean sheets and that is giving us wins.”

Ángel Correa was shown a red card, which appeared to be for something that the forward said to the referee, after he committed a foul in the 86th. Correa is Atlético’s top scorer this season with 12 goals. He will miss the game against Alavés.

Rayo, which had climbed as high as fourth place in December, was left in 13th after 10 rounds without a win.

For Sunday’s clásico, Madrid won’t be able to count on league top-scorer Karim Benzema, who is ruled out with a left-leg injury.

Osasuna dealt a blow to Levante’s diminishing chances of avoiding relegation after easing to a 3-1 win over the league’s bottom team.

Rubén García, who set up one of Osasuna’s goals, will now focus on participating in a convoy of humanitarian aid for Ukraine.

Osasuna will open its training facilities on Sunday to collect donations for a shipment of humanitarian aid organized in part by García.

García will join a convoy of at least five trucks loaded with medicines and baby supplies that plans to leave Spain on Thursday for Poland’s border with Ukraine to help attend to the streams of refugees fleeing Russia’s invasion.

Two teams trying to stave off the drop produced the day’s liveliest clash, with Granada scoring late to complete a 3-2 comeback at Alavés.

Alavés was leading 2-1 with half an hour left before Antonio Puertas leveled for Granada and substitute Luis Suárez got the winner in the 87th.

Alavés striker Joselu Mato had a penalty saved by goalkeeper Luis Maximiano in the first half.

Valencia winger Goncalo Guedes scored early in the second half to help his team win 1-0 at Elche.

Guedes is enjoying the best season of his career with 13 goals in all competitions. He has helped Valencia reach the Copa del Rey final against Real Betis next month. 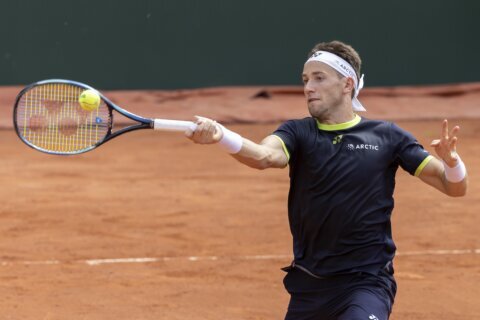 Storm announce plans for practice facility to open in ’24