NAPLES, Fla. (AP) — Jason Kokrak and Kevin Na birdied 12 of their last 13 holes Sunday in fourballs and closed with a 12-under 60 to rally from at three-shot deficit and win the QBE Shootout.

Kokrak and Na were five shots behind after a bogey on the par-3 fifth hole when they ran off nine straight birdies, seven of them by Na. And then it was Kokrak’s turn down the stretch, and he finished off the one-shot victory with a 6-foot birdie putt.

Billy Horschel chipped in for birdie from near the water hazard as he and Sam Burns shot 61 to finish one shot behind. Horschel and Burns did not have a score worse than 62 all week.

Marc Leishman and Jason Day, who opened with a 56 and led all week, couldn’t keep pace. Leishman made a 10-foot eagle putt on the par-5 17th to get within one shot, but then Kokrak in the group ahead made birdie and the Australian duo had to settle for par. They shot 65 and tied for third with defending champions Harris English and Matt Kuchar, who closed with a 62.

Lexi Thompson, the only LPGA Tour player in the field, who also played Tiburon Golf Club last month in the LPGA Tour’s season-ending Tour Championship, teamed with Bubba Watson and had to settle for a 68. They finished ninth in the 12-team field.

DOTHAN, Ala. (AP) — Na Rin An of South Korea closed with a 6-under 66 for a one-shot victory in the eight-round LPGA Q-Series that awarded 46 players LPGA Tour status.

An is a two-time winner on the Korean LPGA Tour. She finished one shot ahead of Pauline Roussin-Bouchard of France, who had a 72.

Atthaya Thitkul of Thailand, who won the Order of Merit on the Ladies European Tour this year, was another six shots behind after a 69.

Also earning a card was Ayaka Furue of Japan, the No. 15 player in the women’s world ranking who has seven Japan LPGA titles.

Alan Wagner birdied his last two holes to finish off a wire-to-wire-victory in the Chile Open. He closed with a 1-under 71 to win by one shot over Chandler Blanchet and Jorge Fernandez-Valdes on the PGA Tour Latinoamerica. … Blake Windred closed with a 3-under 69 and won the Victorian PGA Championship by one shot over Brad Kennedy at Moonah Links. It was Windred’s first victory on the PGA Tour of Australasia. 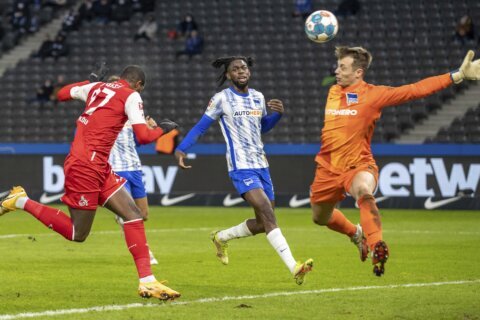 Hertha Berlin out to dispel gloom before derby, Bayern games