BROWNSBURG, Ind. (AP) — Tim Wilkerson won the NHRA U.S. Nationals on Sunday at Lucas Oil Raceway, taking the biggest race of the season for his first Funny Car victory since 2016.

Wilkerson beat Ron Capps in the final with a 3.912-second run at 320.36 mph in a Ford Mustang. Wilkerson won for the 21st time in his career.

“We go out there and run the car and race the lane,” Wilkerson said. “Capps has used me up the last 2-3 years. He’s whooped me every time in the finals. We’ve got a good car, ran well in Brainerd and I was making sure I was going down the track today. In the finals, I ran it like it was a night run. My guys do such a terrific job and there’s a lot of emotion in this. I’m really proud of them.”

Torrence, the points leader and three-time defending series champ, won for the eighth time this season and 48th overall. He beat Brittany Force with a 3.749 at 324.44.

Enders raced to her second straight U.S. Nationals victory, beating Kyle Koretsky with a 6.626 at 206.01 in a Chevrolet Camaro. She has three victories this year and 32 overall.

Krawiec topped Angelle Sampey with a 6.844 at 198.58 on a Buell for his first victory of the season and 49th overall. 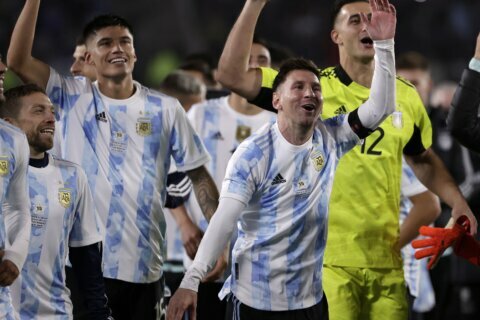