LONG BEACH, Calif. (AP) — Taylor Canfield of Team Stars+Stripes won his fifth Congressional Cup on Sunday, making him the winningest skipper in the 56-year history of one of the world’s premier match-racing regattas.

In July, Canfield and Stars+Stripes joined the New York Yacht Club’s effort to field an all-American squad for the next America’s Cup.

Canfield and Stars+Stripes dominated the five-day regatta at the Long Beach Yacht Club.

“It’s incredible, but it feels just like every other win: fantastic,” the 32-year-old Canfield said. “And to win with the Stars+Stripes Team again, I’m on top of the world.”

“Our goal is to always get better throughout the week. We had some difficult moments and some tough debriefs about how we could continue to get better, and that makes us stronger in the end,” Canfield said. “And we like to keep the umpires out of the game. I think we had only one penalty over the week.” 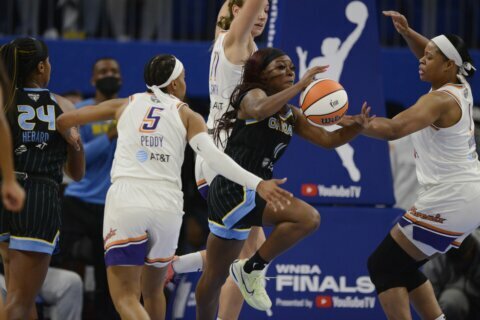 Parker and Sky look to close out Mercury