REYKJAVIK, Iceland (AP) — Germany took another step toward World Cup qualification and showed signs of further progress under new coach Hansi Flick with a 4-0 win in Iceland on Wednesday.

Flick’s debut was a hard-fought win over Liechtenstein, but his team defeated previously unbeaten Armenia 6-0 to move atop the group on Sunday, then extended its lead to four points with the win Wednesday in Reykjavik.

Gnabry got the visitors off to a flying start in the fourth minute after some fine interplay between Joshua Kimmich and Sané.

Kimmich landed a well-worked free kick on Rüdiger’s head for the second goal in the 24th.

Germany remained in control for most of the half, prompting Flick to make two changes at halftime, with Kai Havertz and Lukas Klostermann coming on for the right side.

Werner should have scored early in the second half but shot weakly when he only had the goalkeeper to beat. Hannes Thor Halldorsson easily gathered the ball.

Johann Gudmundsson then struck the post with a curling shot at the other end. Albert Gudmundsson was offside for the rebound.

Havertz failed to make the most of a three-on-one situation in the 55th, but Sané finally put the next big chance away a minute later.

Flick made two more changes after that, but left on Werner, who went on to miss an open goal. Flick didn’t let his disappointment show for long as he encouraged the misfiring Chelsea forward to keep going.

Werner finally scored in the 89th after some brilliant buildup play between Jamal Musiala and Havertz.

Noah Frick’s late goal earned tiny Liechtenstein a 1-1 draw in Armenia, which missed the chance to consolidate second place in the group.

Both North Macedonia and Romania failed to take advantage of Armenia’s slip-up as they played to a goalless draw in Skopje.

Germany has 15 points after six games, followed by Armenia on 11, Romania on 10, and North Macedonia on nine. Iceland has four points while Liechtenstein has one thanks to Frick’s goal in Yerevan. 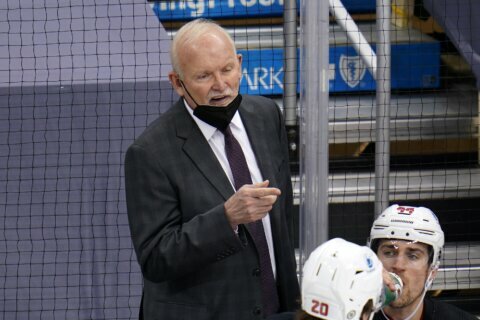