Hill restarted on the inside beside Chandler Smith on the fourth overtime attempt and pulled away in Hattori Racing Enterprises’ No. 16 Toyota in the first NASCAR national series race on the historic half-mile dirt oval.

Hill passed Chandler Smith for the lead just before the field was frozen for a caution on the third overtime try, giving him the key inside position beside Smith.

“I didn’t think we were going to make it back up,” Hill said. “Track position was huge. It was really hard to get around people. You had to kind of rough them up a little bit to get around them. But we don’t stop, we don’t quit, even when we think we’re down and out.”

The 27-year-old Georgia driver wrapped up a playoff spot with a race left in the regular season. He has seven series victories.

The 19-year-old Smith was second, 1.207 seconds back in Kyle Busch Motorsports’ No. 18 Toyota. He held the top spot through seven late restarts before Hill got the advantage on the final try.

The wreck-filled race had 14 cautions that consumed 80 laps and a 17-car pileup in Turn 1 on the first overtime try. The race went 179 laps, 29 more than scheduled.

Grant Enfinger was third, followed by Todd Gilliland, Derek Kraus and Matt Crafton. Kraus rallied after spinning early in the final segment after starting from the pole and winning the first two stages.

Jessica and Stewart Friensen became the first husband and wife to race against each other in a NASCAR national series event since Elton Sawyer and Patty Moise in 1998 at Atlanta in the Xfinity Series. Jessica was 26th, four laps back. Stewart followed in 27th, nine laps off the pace.

Donny Schatz, the 10-time Knoxville Nationals winner and 10-time World of Outlaws champion, was caught up in the big wreck in his Truck Series debut. He was 32nd.

“I had nowhere to go. I was just along for the ride,” Schatz said. “I thought I was going to have a top-10 finish.” 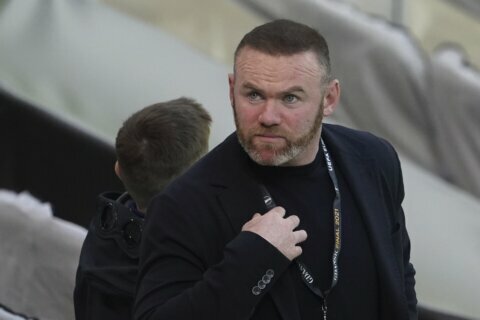