San Francisco heads into the All-Star break with the best record in the majors at 57-32, a huge surprise for a team that wasn’t expected to contend in the NL West.

Gausman (9-3), a nine-year veteran headed to his first All-Star Game, struck out nine and held Washington to four hits as he lowered his ERA to 1.73, second in the majors to the Mets’ Jacob deGrom (1.08).

“It’s pretty impressive,” Casali said. “I don’t know what his ERA ended up, it’s sub-2. That’s kind of incredible. To kind of back up what he started last year is even more impressive. I’m just really proud of him and happy.”

Casali, filling in for injured All-Star catcher Buster Posey, hit an 0-1 sinker from Erick Fedde (4-6) to left-center in the second to put the Giants ahead 3-0.

“I think it’s worth noting that on this homestand we won games and did it without our No. 1 All-Star catcher,” Giants manager Gabe Kapler said. “We had four different catchers start games on this homestand. I think that’s just a good example of how we’ve stepped up for each other as a team.”

Gausman held Washington to three infield singles through the first six innings. But he left a dicey situation for his bullpen in the seventh as the Nationals loaded the bases with no outs.

Dominic Leone limited the damage to one run, striking out Victor Robles with runners at first and third to end the inning.

Starlin Castro doubled with two outs in the top of the ninth, but Giants closer Jake McGee retired Josh Harrison on a lineout to second baseman Donovan Solano to earn his 19th save.

Washington wobbles into the break having lost nine of its past 11 and trails the first-place Mets by six games in the NL East.

“We’ve still got a lot of season left, and I’m excited about that,” Nationals manager Dave Martinez said. “We’ll get some of our guys back, hopefully. We get that four days off, come back re-energized and try to creep back into this thing.”

The Giants optioned right-hander Tyler Beede to Triple-A Sacramento, a day after he gave up three runs in one inning of relief. He’ll return to starting duties in the minors, Kapler said. Lefty reliever Caleb Baragar was recalled.

Giants: Tommy La Stella (fractured thumb) played five innings at second base and went 0 for 2 Saturday in his first rehab appearance for Sacramento. 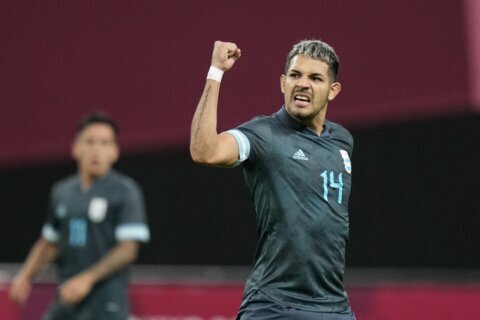