The 3,500 fans allowed in Montreal pales in comparison to the 17,166 who watched the Tampa Bay Lightning beat the Canadiens in Game 2 in Florida. Many restrictions are loosening around Canada and in Quebec, but the team’s request for a crowd of over 10,000 was denied.

“It could have been a way to reward our fans, the people who have gone through 14 or 15 months of isolation to have the chance to participate in an event like this,” Ducharme said Friday morning, hours ahead of Game 3. “It’s special. Unfortunately, we’ll have 3,500 inside and probably 25,000 outside who are going to be shoulder to shoulder. It’s hard to see the logic.”

Crowds outside the arena have grown into the thousands as fans packed the street.

Game 3 falls on a four-day weekend for most Canadians, with Canada Day celebrated a day earlier. With the coronavirus pandemic easing, hotels in Montreal began filling up on Thursday, and there was a festive atmosphere with large crowds gathering at the outdoor seating areas along Boulevard Saint-Laurent.

“Montreal, their fan base is huge, we kind of saw pictures and throughout the playoffs the last round against Vegas all those fans watching — as much as they want to be inside, they obviously can’t — to come together and watch the team,” Lightning forward Patrick Maroon said. “It’s a very loud building, passionate fans, they love their Montreal Canadiens.”

“It’ll be very exciting, for sure,” rookie forward Cole Caufield said. “Obviously, wish we could have more people, but certain situations (are) going on. It’ll still be loud and proud to be in there. We’re really excited to get back home and play in front of our fans. I know outside it’ll be pretty exciting, too.”

The “Ole, Ole, Ole”-chanting crowd was so large and loud during Montreal’s Game 6 semifinal-clinching series win over Vegas that authorities had fans stay inside the arena for an additional half-hour in order to disperse those outside.

It’s not clear if there’s any chance more fans will be allowed in for Game 4 on Monday.

After two weeks in isolation following his positive COVID-19 test, Ducharme is back running the Canadiens.

“When they said it would be July 2, I was looking at that date and really looking forward to it being here,” he said. “So I’m really happy to be here with the staff, with the players, with everyone to continue this battle.”

Assistant Luke Richardson filled in for Ducharme, who still participated in team meetings. But it’s not the same as being there in person.

“Even if I stayed in contact with the team or with the coaches, it’s just the little moments like being able to take 30 seconds or a minute with a player, or just talking about the game coming up or whatever,” Ducharme said. “It’s the type of thing I wasn’t able to do from a distance, and it’s something that’s important to me. So to come back like this, to be with the group, with the coaches, with the players, to physically be there makes these things a lot easier.”

Lightning coach Jon Cooper ruled out injured forward Alex Killorn for Game 3, with Mathieu Joseph serving as the replacement, just like on Wednesday. Joseph played only 6:25 in Game 2.

Killorn’s absence also means a promotion for Tyler Johnson to the second line to skate with Anthony Cirelli and Steven Stamkos.

“The one thing about those players is we’ve been together so long everybody knows their tendencies, everybody knows where they want pucks,” Cooper said. “Killer’s a little bit bigger body than Johnny, a bit more possession game. Johnny’s more of a fast, like a speed player, can beat you off the rush. But in the end, the competitive spirit’s the same.” 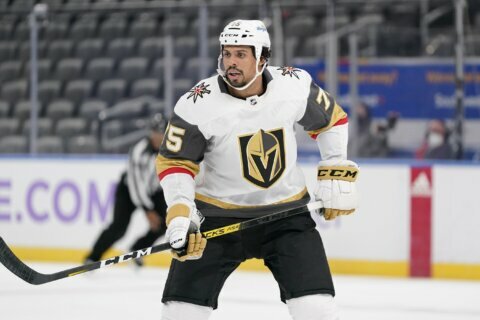