TULSA, Okla. (AP) — From Ryder Cup captains past and present to former winners at Southern Hills, the Senior PGA Championship offers a mix of inspiration and motivation all because of one eligible player who chose not to join them.

Phil Mickelson will play on the PGA Tour at Colonial instead of one of the elite majors for the 50-and-older set.

Mickelson made history last week by winning the PGA Championship at 50 to become golf’s oldest major champion and he got the attention of his peers.

Ryder Cup captain Steve Stricker, who made the cut last week at Kiawah Island, said it pushed the boundaries of what he imagined was possible.

“I think he showed everybody that it’s possible later on in your career,” Stricker said. “We go from (2020 PGA champion) Collin Morikawa, one of the youngest players to win a major, to the oldest player in history to win a major. That’s the cool and unique thing about the game of golf, and that’s what’s exciting. If you put the time in and you work hard at it, Phil showed us that we can continue to compete at that higher level.”

Jim Furyk, the 2018 Ryder Cup captain and now an assistant to Stricker, said watching Mickelson negotiate the perils of Pete Dye’s Ocean Course at Kiawah was a source of pride for all golfers over 50.

“I think all the guys on the Champions Tour have a pride in the quality of the product that we’re putting out there and our abilities,” Furyk said. “We don’t hit the ball as far as we used to, but you look at the scores … seems like 10, 12, 15, 16, 18 under wins every week, and a lot of times in a three-day tournament.

“To see a guy our age go out there and still compete against the kids and then not only that, win a major championship, create history and then do it on a golf course … that’s not a golf course I would expect a 50-year-old to win on.”

Scott Verplank worked as an analyst for ESPN+ and saw much of Mickelson’s work. He ranked it with Jack Nicklaus winning the 1986 Masters and Tiger Woods’ winning the 2019 Masters as among the greatest feats in golf that he has witnessed.

“I was covering his group and he was 3 over after 6,” Verplank said. “And I’m sitting there like going, ‘You know, this golf course is not going to fit Phil.’ From that point on he just whipped everybody’s butt and he played the best.”

The field at the Senior PGA includes players who know how to navigate Southern Hills, though the renovation by architect Gil Hanse completed in 2019 has forced them to relearn the greens.

That starts with Retief Goosen, who won the 2001 U.S. Open at Southern Hills despite missing a 2-foot putt on the final hole that forced a Monday playoff with Mark Brooks, who had earlier three-putted the 18th.

Also in the field is Tom Lehman, who won the 1996 Tour Championship in dominating fashion, shooting 12 under to win by six over Brad Faxon and seven over Stricker, whom many consider a favorite this week.

Billy Mayfair won the 1995 Tour Championship in a survival test and is back 26 years later at age 54.

“The greens are very different,” Mayfair said. “You’re going to have to be very accurate where you land because a slight miss and the ball will now run off the green and sometimes by a lot.”

Any list of favorites must also include Bernhard Langer, who has won 11 senior majors among his 41 victories on the PGA Tour Champions, including the 2017 Senior PGA. He has 15 top-10 finishes in 21 events in the wraparound 2020-21 season and shows no signs of slowing at age 63.

Not to be overlooked is Ernie Els of South Africa, who is practically an adopted Oklahoman.

Not many realize Els played in the 1990 Oklahoma Open at Oak Tree Country Club in Edmond in his first full year as a pro. The next year he played in the 1991 Ben Hogan Open at the Golf Club of Oklahoma, finishing seventh.

“That was the first top-10 finish of my professional career,” Els said.

He earned $6,143 for the year and finished 123rd on the money list on the Ben Hogan Tour, now known as the Korn Ferry Tour. That was his only top 10. It only got better — much better — from there for the Hall of Famer. 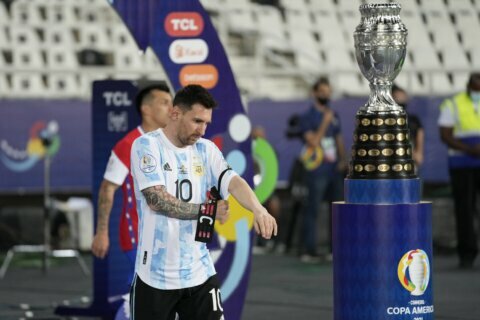