It’s a day for 39-year-old tennis legends, with Roger Federer and Serena Williams both playing first-round matches. Federer meets Uzbek qualifier Denis Istomin, who is ranked No. 203, in the third match on Court Philippe Chatrier. It’s Federer’s first Grand Slam match since last year’s Australian Open, when he reached the semifinals. The 20-time Grand Slam champion missed the rest of last year after two operations on his right knee and has played only three matches this year. Williams is up next in the main stadium against 74th-ranked Irina-Camelia Begu, as she renews her pursuit of Margaret Court’s record of 24 Grand Slam titles. The action on Chatrier opens with defending champion Iga Swiatek facing 101st-ranked Kaja Juvan. Swiatek won the Italian Open in May on red clay.

$15,000 — The amount Naomi Osaka was fined by the tournament referee for skipping the post-match news conference after her first-round victory. She was also threatened with stiffer penalties if she continues to avoid her media obligations. Osaka announced earlier in the week that she won’t attend news conferences in Paris.

“She wanted to fight for … her psychology of her life. And we have to respect that.” — Russian veteran Elena Vesnina, when asked about Osaka’s decision to avoid the media in Paris. Vesnina, who returned last month after a three-year maternity leave, beat Olga Govortsova 6-1, 6-0. 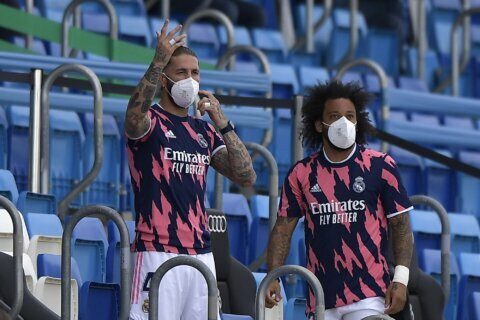