Eight defeats, leads carelessly thrown away, too many red cards and a recurring lack of composure have left PSG trailing Lille by three points heading into Sunday’s penultimate round of games.

The season after reaching its first Champions League final, PSG has fallen well short of expectations and Marquinhos makes no excuses.

“Since the start of the season we’ve had setbacks we shouldn’t have had. We’ve lost games we shouldn’t have (and) we’re counting the amount of points we’ve lost,” he said after last Sunday’s 1-1 draw at Rennes, in which PSG had led.

“It’s unacceptable that PSG drops points in this way,” the popular central defender added. “We’re 1-0 up, 2-0 up and still teams come back against us.”

Rather than coasting to the title as it has so often done since Qatari investors QSI took over 10 years ago, PSG is at the mercy of a Lille side which has only lost three games in a remarkably consistent campaign.

The northern side has been brilliantly coached by Christophe Galtier and can seal its first title since 2011, which was just before QSI took over PSG.

Lille needs four points from the remaining two games to guarantee the title, but a draw against Saint-Etienne would be enough if PSG loses to visiting Reims on Sunday.

Perhaps the best example of PSG switching off in games, something which clearly irked Marquinhos after the Rennes match, was the 3-2 loss at Lorient.

Despite lining up with Neymar, Kylian Mbappe, Angel Di Maria and Mauro Icardi — known as the “Fantastic Four” and costing a combined 513 million euros ($622 million) — PSG conceded two late goals to a side in the relegation zone.

In total, PSG has lost 13 games — including five in the Champions League — and the tally would have been considerably higher without goalkeeper Keylor Navas.

“We have to be honest,” Marquinhos said. “We haven’t been very strong.”

Di Maria’s petulant red card in the Champions League semifinal defeat to Manchester City was followed by a clumsy red for Kimpembe against Rennes.

Lille holds the cards and statistics suggests the shrewd Galtier — in contention to win France’s best coach for the third time — is unlikely to throw them away.

With 20 clean sheets and 22 goals conceded in 36 games, Lille has an outstanding defense led by veteran center half Jose Fonte. Goalkeeper Mike Maignan is among the best in the league, along with Navas.

Still, PSG has by far the best squad on paper and its players know they shouldn’t be in this situation.

“If we lose the league we only have ourselves to blame,” Mbappe said. “It will be us who lost (the title), not Lille who won it.”

He spoke on Eurosport on Wednesday night after PSG reached the French Cup final on penalty kicks, after getting pegged back twice in a 2-2 draw.

Mbappe, who is friends with Maignan, quickly rectified himself.

“Respect,” he wrote on Instagram. “Lille will make for a great champion if it wins.”

Lille has a far better record against sides in the top four than PSG, taking 13 points from six games against direct rivals. PSG has easily the worst, with four points, behind Monaco (7) and Lyon (10).

PSG didn’t even score against Lille, with Mbappe playing in both games, and if Lille had drawn fewer games then Galtier’s side would already be champion. 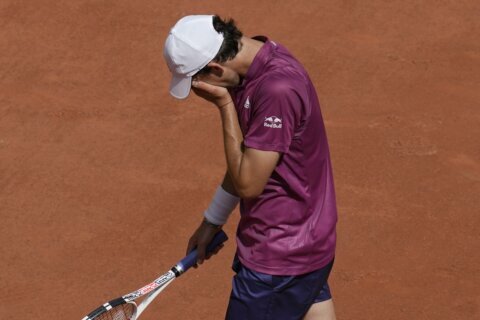