Notre Dame continuing to be surprise team in ACC baseball

The Irish were picked last in their division in the Atlantic Coast Conference. They go into the final month of the season with the second-best league record behind Louisville.

Notre Dame swept a doubleheader at Boston College on Sunday to remain the only ACC team to not drop a conference series. The Irish won the second game 13-9 after trailing 9-0 in the seventh inning. A 12-run eighth inning fueled their biggest comeback in a win since 2009.

“I have never been through anything as amazing as that inning in my baseball career,” second-year coach Link Jarrett said.

The Irish are 31-10 since Jarrett took over for the fired Mik Aoki, who reached the NCAA Tournament just once in nine seasons. Five everyday players were on the 2019 team, Carter Putz (.345) and Niko Kavadas (15 homers, 36 RBIs) among them.

Pittsburgh (20-11, 14-10) also has surpassed expectations in the ACC, but it’s in the middle of a two-week COVID-19 pause. The Panthers had their weekend series at top-10 Louisville and this week’s nonconference games against Northern Kentucky canceled.

Pitt, picked last in the Coastal Division, has its highest ACC win total since joining the league in 2014.

There is consensus on the top three teams in the polls. Arkansas (32-7), Vanderbilt (31-7) and Texas (33-9) are 1-2-3 by D1Baseball.com, Baseball America and Collegiate Baseball newspaper.

All three teams won two of three games over the weekend — Arkansas at South Carolina, Vanderbilt at home against Mississippi State and Texas at Oklahoma State.

Fairfield outscored Manhattan 55-21 in a four-game sweep and remains the only unbeaten team in Division I at 25-0. The Stags slipped to No. 2 in the RPI, overtaken by Arkansas.

Postseason play is not assured for college baseball royalty LSU as it goes into this weekend’s home series against Arkansas.

The Tigers (24-15) are just 6-12 in SEC play with 12 games to go. The two bottom teams don’t qualify for the SEC Tournament, and the Tigers are 11th, one game ahead of Missouri and Texas A&M and three ahead of Auburn.

“I say it to the team every year, the first goal is to make the SEC Tournament,” coach Paul Mainieri said. “Everybody kind of chuckles when I say that. This shows you how you never take anything for granted.”

The last year LSU finished under .500 in league play and missed the conference tournament was 2011.

LSU lost 10-9 to Mississippi on Sunday after it blew a 9-1 eighth-inning lead. The Tigers have squandered late leads in losses to South Carolina and Tennessee.

Kentucky’s T.J. Collett homered three times in the second game of a doubleheader against Alabama on Sunday. Collett has 40 career homers, tied for second on the Kentucky all-time chart with 2014 Golden Spikes Award winner A.J. Reed.

Michigan State’s Sam Benschoter struck out a career-high 17 in 9 1/3 innings of relief against Nebraska — and took the loss. The senior had the most strikeouts for the Spartans since Mark Mulder fanned 16 against Campbell in 1998. Benschoter gave up the go-ahead run in the 12th inning, and the Spartans lost 9-6. 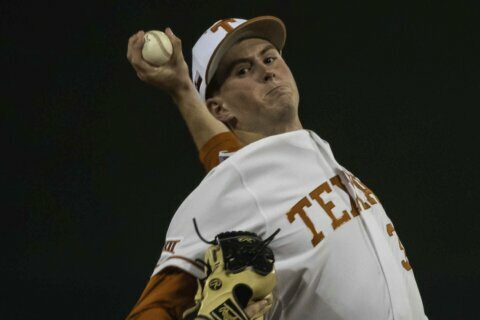