ISTANBUL (AP) — Veteran striker Burak Yilmaz scored a hat trick as Turkey stunned the Netherlands 4-2 on Wednesday in the opening game of European World Cup qualifying, while Norway made a statement before their Group G match against Gibraltar started.

Yilmaz, the 35-year-old Lille forward, struck twice before the break and again late in the second half to secure the win in the Group G opener just as the Netherlands was threatening a comeback.

Players lined up before kickoff wearing T-shirts over their national-team jerseys that had the message “HUMAN RIGHTS” followed by “Respect on and off the pitch.”

Qatar is under scrutiny because of its discriminatory laws and conditions for the migrant workers who are helping to build infrastructure for the World Cup, which starts on Nov. 21 next year.

Turkey has not qualified for a World Cup since finishing third in 2002, while the Dutch failed to reach the last tournament in Russia after also finishing third in Brazil in 2014. The Netherlands, which has finished runner-up three times at the World Cup, also missed the 2016 European Championship and their recent struggles in qualifiers resurfaced at Ataturk Olympic Stadium.

Yilmaz opened the scoring in the 15th minute with a shot from outside the penalty area that deflected off defender Matthijs de Ligt’s hand to beat goalkeeper Tim Krul. He doubled the lead from the penalty spot in the 34th minute after Donyell Malen fouled Okay Yokuslu.

The Netherlands looked to have cut the lead in the 45th minute, but referee Michael Oliver ruled that De Ligt’s header had not fully crossed the line before Yokuslu headed it clear. There was no video referee on hand to check.

AC Milan midfielder Hakan Calhanoglu made it 3-0 in the first minute of he second half, turning in space outside the penalty area and firing a low shot into the far corner.

One of the replacements, Davy Klaassen, controlled a cross from Memphis Depay and turned in the same movement before firing past goalkeeper Ugurcan Cakir to make it 3-1 in the 75th minute. And another substitute, Luuk de Jong, made it 3-2 a minute later, bundling another cross from the left over the line.

But Yilmaz scored his third with a curling free kick in the 81st to seal the win for Turkey.

Depay missed a penalty deep in stoppage time to compound the Dutch disappointment.

The Netherlands was without captain and center back Virgil van Dijk, who is still recovering from a serious injury to his right knee.

In Gibraltar, the hosts held Norway scoreless until the 43rd minute, when Alexander Sorloth broke the deadlock, quickly followed by Kristian Thorstvedt. Jonass Svensson completed the scoring in the 57th minute.

In the other Group G match, Montenegro beat Latvia 2-1 in Riga. 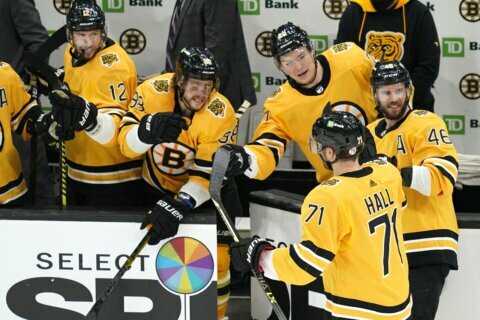