PONTE VEDRA BEACH, Fla. (AP) — Justin Thomas found the right time for a near-perfect performance to put a rough start to the year behind him, rallying from three shots behind with bold play to close with a 4-under 68 and win The Players Championship on Sunday.

Thomas becomes only the fourth player to win a major, The Players Championship, the FedEx Cup and a World Golf Championship, and it couldn’t have come at a better time.

He called it as good as he has ever played tee-to-green, and he needed it to outlast 47-year-old Lee Westwood, a hard-luck runner-up for the second straight week. Westwood birdied the final hole for a 72 to finish one shot behind.

Thomas began the year with a barely audible anti-gay slur under his breath after missing a short putt. That led to one corporate sponsor dropping him and another giving him a public reprimand. The one time he had a chance to win, he learned his grandfather died before the final round of the Phoenix Open.

He was shaken until Sunday at the TPC Sawgrass, where he took on every shot and delivered a gem.

Thomas went birdie-birdie-eagle-birdie around the turn, and put away Westwood for good with a pair of lag putts from 50 feet — one for birdie on the par-5 16th to take the lead, another on the island-green 17th for a par.

Thomas still had one more shot before he was in the clear. He took on the water framing the left side of the 18th fairway, the ball moving right-to-left and bouncing straight off the crown of the first cut, safely in the fairway.

His approach landed on the fringe — the first green he missed all day — leaving a simple two-putt for par and the 14th victory of his PGA Tour career. He returns to No. 2 in the world.

Bryson DeChambeau, coming off a win last week at Bay Hill, shot 71 and tied for third with Brian Harman, who had a 69 and played the final 12 holes without a bogey.

Thomas was outside the cut line after nine holes on Friday. He followed that with a 64 on Saturday to get in the mix, and he finished off in style to pick up $2.7 million with a win against the strongest and deepest field in golf.

DOHA, Qatar (AP) — Antoine Rozner of France holed a 60-foot birdie putt on the final hole for a 2-under 69 and a one-shot victory in the Qatar Masters, moving him high enough in the world ranking to qualify for the World Golf Championship in Texas in two weeks.

Rozner was tied for the lead with Guido Migliozzi, who had closed with a 65 at Education City Golf Club, when his approach in the 18th left him far enough away that his best hope appeared to be two putts for par and a playoff. Instead, he made the double-breaking putt for his second European Tour victory in 29 events.

Darren Fichardt of South Africa and Gaganjeet Bhullar of India also made birdie on the 18th that allowed them to join Migliozzi in a tie for second.

This was the final week to qualify for the WGC-Dell Technologies Match Play in two weeks in Austin, Texas, which is for the top 64 available players from the world ranking.

Jaco Prinsloo closed with a 7-under 65 and won the Players Championship at Dainfern Golf Estate with a birdie on the third playoff hole. It was his third victory on the Sunshine Tour and first since 2017. He won the playoff over Jake Roos (63) and Daniel van Tonder (65). … Andrew Evans shot a 5-under 67 for a two-shot victory in the Isuzu Queensland Open on the PGA Tour of Australasia. Deven Lawson (66), Bryder Macpherson (68) and Blake Windred (70) tied for second. 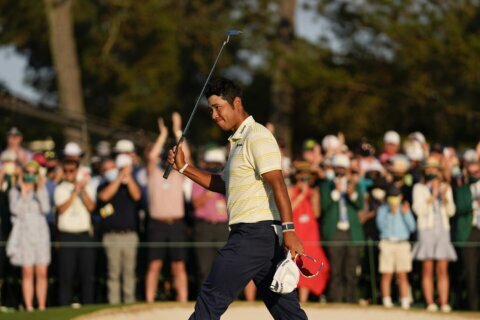