Philadelphia made the surprising move involving one of its top defensemen on Tuesday, a day after the team nearly became the first to lose to the Buffalo Sabres in more than a month.

The slow-starting Flyers rallied from a three-goal, third-period deficit to pull out a 4-3 overtime win and extend the Sabres’ winless skid to 0-15-3, matching the NHL’s longest in 17 years.

Except for noting Gostisbehere’s inconsistencies reflecting that of his entire lineup over the past month, coach Alain Vigneault repeated a vague response in saying the decision to waive the defenseman provided Philadelphia more roster flexibility.

“Obviously, Shayne, like the rest of our team, he’s not the only one who has had some consistency issues,” Vigneault said. “But this does permit us to be flexible.”

NHL teams have until noon Eastern time on Wednesday to place a claim on the sixth-year player. Should he clear waivers, the Flyers have the option of re-inserting him into the lineup or placing him on the taxi squad.

Philadelphia closes its two-game series at Buffalo on Wednesday.

Gostisbehere has five goals and six assists for 11 points in 25 games, and he was benched for a three-game stretch two weeks ago. He’s had three assists in five games since returning to action.

Gostisbehere became the odd-man out on a team carrying eight defensemen. He is in the fourth year of a six-year, $27 million contract and represents a $4.5 million salary cap hit.

It was only a day earlier when Vigneault spoke positively of Gostisbehere’s performance, when assessing the defenseman being paired with Sam Morin over the previous two games.

“I thought they were effective,” Vigneault said, before the Flyers played Buffalo. “Shayne, I thought, he moved the puck well and quick to our forwards.”

Gostisbehere’s uncertain status follows Vigneault’s decision to have Hart spend much of this week focusing solely on practicing in hopes the third-year starter can pull out of a season-long funk, including allowing 26 goals in his past six appearances.

After getting off to an 11-4-3 start, the Flyers have gone 6-9-1 in a slump that dropped them to fifth in the East Division standings. Philadelphia had not won consecutive games until beating Buffalo, which followed a 2-1 win over the New York Rangers on Saturday.

Goalie Brian Elliott called the decision to place Gostisbehere on waivers as “just another hurdle in your journey,” while adding the team would do its best to support the player.

“It’s part of the game, and a part of the business,” Elliott said. “Some moves and situations, you don’t understand all the aspects of. I think it’s just for everybody taking it the right way and trying to get better.”

The goalie was more critical of how the Flyers came out flat against the Sabres.

“Hopefully, a little bit of a wake-up call,” said Elliott, who stopped 29 shots. “The first couple of periods, we kind of threw our sticks on the ice and maybe thought it was going to come easier than it did.” 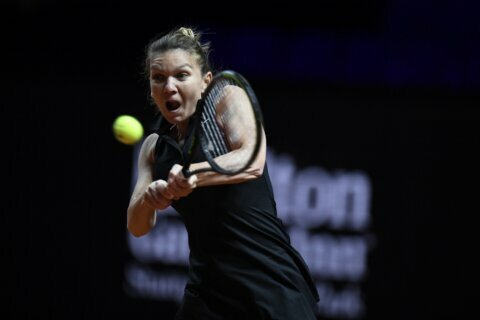