GENEVA (AP) — A UEFA-recognized soccer fan group united supporters across the continent Tuesday to oppose plans by some wealthy clubs for a Super League.

A statement from Football Supporters Europe denounced “an unpopular, illegitimate and dangerous scheme in the eyes of the overwhelming majority of fans” and was signed by about 100 national and team groups, including from the clubs pushing hardest for the project.

“The reasoning behind a closed breakaway league is simple: it allows big clubs to succeed off the pitch even when they fail on it. It is anti-competitive by design,” said the FSE, which UEFA consults with and describes as “one of its key stakeholders.”

Real Madrid, Barcelona, Liverpool and Manchester United have been linked to the latest version of a competition that would include 15 permanent members in a 20-team competition kicking off in the 2022-23 season. They would still play in domestic leagues on weekends.

It would give member clubs at least 18 Super League games compared to a guaranteed six games in the current Champions League format.

“We do not want or need more European games,” the fans said. “And we are tired of paying for the fantasy of ever-increasing wages, transfer fees, and profits, as well as the financial mismanagement of some.”

Debts at Madrid and Barcelona have been revealed to have soared higher to hundreds of millions of dollars during the coronavirus pandemic.

Details of the latest Super League proposal leaked last month as UEFA works with the European Club Association and European Leagues group to finalize reforms of continental club competitions for 2024.

Ongoing secretive talks between a few elite clubs and potential Super League financiers led FIFA and the six continental governing bodies, including UEFA, to warn against the project last month.

Players who take part in a Super League would be banned from representing their national teams at the World Cup and other continental championships for national teams.

UEFA has led talks about its own competitions against a backdrop of clubs’ increasingly dire warnings of their collective loss of expected revenue running to billions of dollars because of the pandemic.

The Super League plan envisions earning 4 billion euros ($4.8 billion) annually from broadcasters and sponsors, shared among 20 clubs though weighted toward a few.

In comparison, UEFA’s expected revenue this season is about 3.2 billion euros ($3.9 billion) for the Champions League and Europa League, which feature 80 teams.

“While reform is needed,” the fans said, “it should not come in the shape of an ultimatum from wealthy clubs seeking to benefit from an unprecedented public health crisis.” 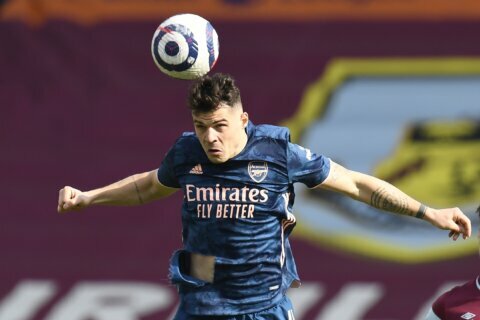