BURNLEY, England (AP) — Manchester City restored its three-point lead in the Premier League by beating Burnley 2-0 on Wednesday for a ninth straight win.

Gabriel Jesus and Raheem Sterling scored first-half goals at Turf Moor for City, which has now won 13 straight games in all competitions stretching back to Dec. 15.

Pep Guardiola’s team also has a game in hand over second-place Manchester United.

Jesus headed into an empty net in the third minute after Burnley goalkeeper Nick Pope could only parry out a shot from Bernardo Silva.

Sterling doubled the lead by converting a close-range finish from a central position after meeting a ball driven across the face of goal by Ilkay Gundogan in the 38th.

City was untroubled by an opponent with the lowest goals tally in the division — 13 — and squandered a raft of chances to increase the margin of victory in the second half.

Sterling was the biggest culprit, shooting straight at Pope when sent through on goal by Gundogan.

Still, the England winger became the first City player to move into double figures for the season in all competitions.

City next faces champion Liverpool at Anfield on Sunday.

Burnley is eight points clear of the relegation zone. 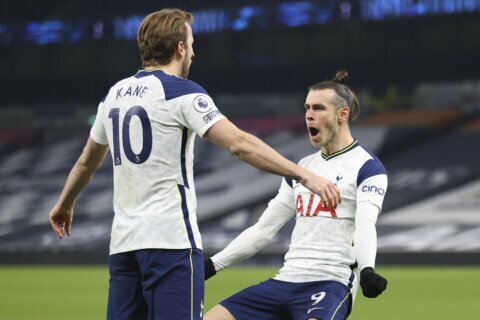