Messi shows his worth, leads Barcelona to win over Athletic

MADRID (AP) — Lionel Messi showed his worth yet again, scoring on a beautiful free kick to lead Barcelona to a 2-1 win over Athletic Bilbao in the Spanish league on Sunday.

The 650th goal in his Barcelona career came amid the noise prompted by Spanish newspaper El Mundo’s report that his contract is worth 555 million euros ($673 million) over four seasons. The Catalan club, mired in debt and political turmoil, had to quickly deny its involvement in the leak.

Antoine Griezmann also scored for Barcelona, which won its fifth in a row in the league and moved into second place for the first time this season. It has the same 40 points as Real Madrid but is ahead on goal difference. Atlético earlier opened a 10-point lead after winning 4-2 at Cádiz with a pair of goals by Luis Suárez.

Messi, who had his request to leave Barcelona denied by the club last season, seemed unaffected by the leak Sunday of his contract details. He played well from the start and was decisive again at the Camp Nou Stadium. The Argentine great opened the scoring in the 20th minute with a free kick shot that curled over the wall and found the top corner for his 12th league goal.

“Messi has done a lot for this club and today he scored a great free kick goal,” Barcelona coach Ronald Koeman said. “We have to respect him. It seems there is bad intention and a desire to hurt him. Without Messi you can’t aspire too much.”

Athletic equalized with an own-goal by Jordi Alba as the defender tried to clear a cross by Raúl García in the 49th, and Griezmann put Barcelona ahead again, completing a cross by Óscar Mingueza in the 75th.

It was the third meeting between Barcelona and Athletic this month, with the Catalan club winning a postponed league game and losing the Spanish Super Cup final.

Athletic was trying to win its sixth consecutive match in all competitions. The loss was only its second since coach Marcelino García Toral was signed in the beginning of the year — the first also was against Barcelona.

It was Barcelona’s first home match in 2021. It had played eight consecutive games away from the Camp Nou, including in the Copa del Rey and the Spanish Super Cup.

Suárez continued his stellar form with Atlético, scoring twice in the win over Cádiz to help Diego Simeone’s team open a huge lead at the top.

Suárez scored a goal in each half to reach 14 league goals this season, marking his best-ever league start in Spain and becoming the league’s leading scorer. The Uruguay striker, who was let go by Barcelona at the end of last season, has scored nine goals in his last eight matches with Atlético.

“When a striker is on a roll, you have to take advantage of it,” Suárez said. “You have to enjoy it because it’s hard to stay at this level the whole year.”

It was the eighth league win in a row for Atlético, which reaches the halfway mark of the season with the 10-point gap to Barcelona and Real Madrid despite having a game in hand.

“Every match is an important step toward reaching our goal,” Simeone said. “To continue like this we have to keep focused on match after match.”

Simeone’s team has 50 points from 19 matches, remaining on pace for a 100-point season for the first time.

“These are important numbers that put us at the top,” Suárez said. “We have to stay on this path.”

Suárez opened the scoring with a well-placed curling free kick in the 28th and added his second from the penalty spot in the 50th.

Saúl Ñíguez netted before halftime and Koke Resurrección got on the board near the end of the match to complete the scoring for Atlético, which is seeking its first league title since 2014.

Cádiz, winless in its last three league matches and sitting 13th in the standings, got goals from Álvaro Negredo in the 35th and 71st minutes.

Celta Vigo and Granada failed to move closer to the top of the standings after a scoreless draw in Granada. Celta, winless in its past six games in all competitions, stayed in 10th place. Granada was seventh.

Celta was held despite the return of striker Iago Aspas, who had been sidelined for nearly a month because of a muscle injury.

Earlier on Sunday, 12th-place Getafe was held to a 0-0 draw against Alavés, which had lost four in a row in all competitions and is just inside in the relegation zone. 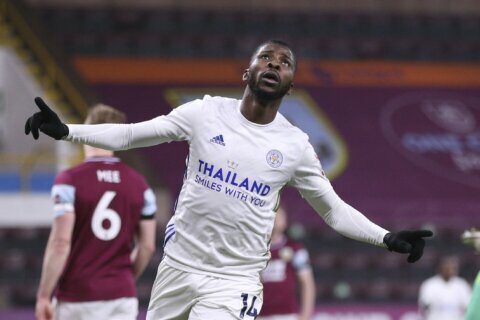 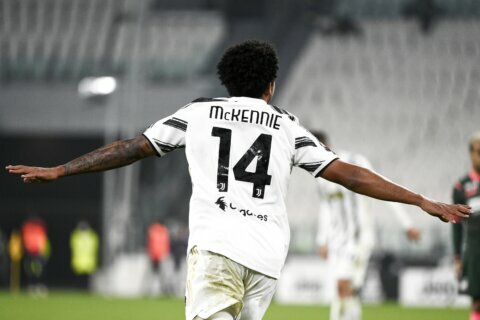 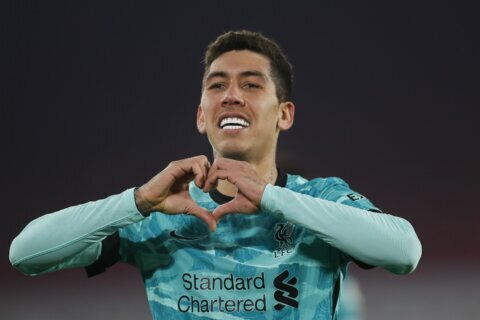