The road to March is filled with potholes, and it certainly isn't the easiest of paths to navigate.
Listen now to WTOP News WTOP.com | Alexa | Google Home | WTOP App | 103.5 FM

The road to March is filled with potholes, and it certainly isn’t the easiest of paths to navigate — especially when you’re on the road for extended periods of time.

Maryland began the season by winning eight straight under new coach Kevin Willard, only to stumble with five losses in seven games. The last two were tough ones to stomach offensively, with slow starts that generated 13 points in the first half at Michigan, and 17 at Rutgers (Jersey Mike’s Arena name or not, the RAC remains a tough place to play).

But instead of seeing a season coming undone, the coach who has negotiated these rough roads in the past found the way back home. The Terps responded Sunday by making nine of their first 13 shots in the team’s 80-73 win over then-No. 24 Ohio State.

“I was not worried that we would play bad offensively,” Willard said.

The Terps have a week to rest up and get ready for Iowa — on the road. Then they come back to College Park two days later for a date with Michigan. The road to March never lets up.

Up top: Houston was my number one on this week’s Associated Press Top 25 ballot followed by Kansas, Tennessee, Purdue and Alabama. My ballot made a few waves this week because my two tough omissions were No. 11 Kansas State and No. 19 Providence. It’s not an exact science, but both were in my final set of 10 teams on the Top 25 bubble and missed the cut. Even with Wildcat wins at Texas and Baylor, evidently I still held the grudge of a double-digit loss to a Butler team that’s underwater in the Big East. Even with the Friars’ hot start in the conference, I’m still waiting for a big road win. I’m looking forward to next Saturday through Monday when I put my next ballot together. Small school shout-outs: San Diego State and Charleston.

Going inside: George Washington (8-8, 2-1 Atlantic 10) is in its first season under Coach Chris Caputo. Usually when there’s a coaching change, it’s interesting who stays (like Donta Scott at Maryland) and who leaves, especially with the new transfer rules. James Bishop remained in Foggy Bottom and currently leads the A-10 in scoring (22.3 points per game) while ranking second in assists (5.0), while Ricky Lindo tallied 16 points with 11 rebounds in last weekend’s win over UMass. GW plays three of its next four at the Smith Center in D.C. with the exception a drive just outside the Beltway to George Mason the exception (even though it’s a holiday Monday, WTOP recommends you leave yourself plenty of time with alternate routes).

On the perimeter: James Madison (11-6, 2-2 Sun Belt) left the CAA and FCS for the SBC and FBS last offseason. While it debuted dynamically in football by posting a 6-2 conference mark that would have won the East Division (thanks to a tiebreaker against Coastal Carolina) one wondered if that would transfer to men’s basketball. Back-to-back losses at Atlantic Union Bank Center drop JMU to the middle of the pack: Seventeen turnovers torched their effort against Texas State and 4-26 shooting from three doomed them against Appalachian State. On the bright side, the Dukes still lead the Sun Belt in shooting and scoring as well as defending the three, plus turnover and rebounding margin. Next up: A trip to last place South Alabama.

Who’s open: Meanwhile, the league JMU left behind has thrived with No. 23 Charleston posting 15 straight wins after falling in November to then-No. 1 North Carolina. The Cougars’ lone single-digit CAA win came at Towson Dec. 31 in overtime. That was the end of a rough patch for the Tigers (10-6, 2-1 CAA) where coach Pat Skerry’s team dropped five straight: Two were on the road, another was at neutral site Chicago, and the two home games were both decided in OT (the other one came to Navy). Thank goodness Skerry has a veteran nucleus led by senior guards Nicolas Timberlake and Cameron Holden, plus forward Charles Thompson. The Tigers have won two in a row entering Wednesday’s trip to defending tournament champ Delaware — the school that knocked top-seed Towson out of the CAA Semifinals last March.

Last shot: Or shots, as it were. On Saturday, the schedule allows for an A-10 doubleheader starting with George Mason meeting defending regular season champ Davidson at noon. The usually hot-shooting Wildcats have senior guard Foster Loyer (16.6 points with 4.9 assists per game) back but rank 12th in the conference at shooting the three, and are 14th in rebounding margin. The Patriots are third-best in the A-10 on the boards and are second best at defending the three. After that game ends, we move to Foggy Bottom as George Washington hosts Saint Louis at 4 p.m. in a showdown of the top two scoring teams in the conference. Can the Colonials contain Yuri Collins (who leads the nation with 10.8 assists per game) and the most efficient offense (tops in assist-to-turnover ratio) in the A-10? 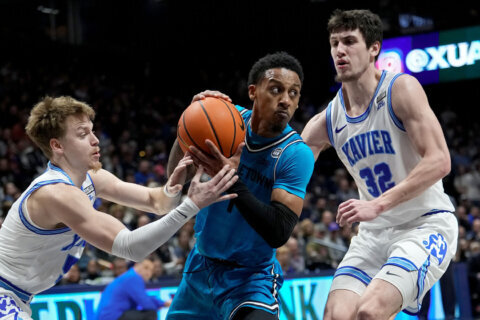 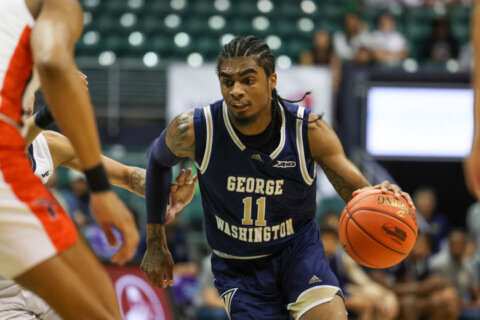 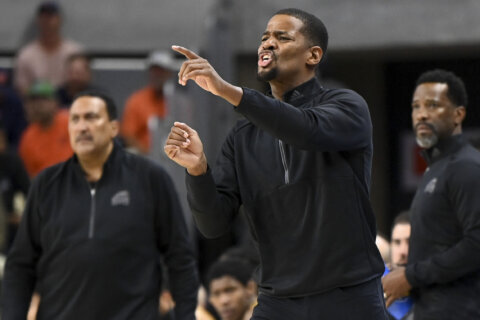