As the Nationals enter the final month of the 2022 season hopelessly out of contention (the elimination number for the NL Wildcard is now three) and on a collision course with 100 losses (they’d need 16-12 to avert that disaster) the post-selloff season hasn’t been a complete waste.

Instead of confronting an era of “wasn’ts” we are now looking at what might be. And front and center in the summer surprises is “overnight success” Joey Meneses. The 30-year-old outfielder/first baseman made his big league debut the night the Nats traded away Juan Soto and Josh Bell and homered in a win over the Mets Aug. 2.

Since then he’s actually posted better numbers than Soto and Bell, batting .327 with seven homers and 15 RBI while scoring 20 runs over 28 games.

To get to Washington and the big league level, Meneses played in 894 minor league and 482 foreign league games. The Johnny Cash song “I’ve Been Everywhere”? Joey’s been to Rome, Georgia, and Zebulon, North Carolina. He’s been to Jackson, Mississippi, and Allentown, Pennsylvania. He’s been to Worcester, Massachusetts, and Portland, Maine, before playing for the Nats’ AAA affiliate in Rochester, New York. But that’s not all, Meneses has logged games in the Mexican Winter League (Tomateros de Culiacan) as well as the Japanese Pacific League (Orix Buffaloes). So yes, he has been everywhere.

What we sometimes lose sight of in covering or watching MLB games is how difficult it is to climb an organizational ladder and reach this level. Only the top 1% of baseball players reach the majors and to see this guy — who I’m sure many times wondered if this day would ever come — succeed the way he has is pretty cool.

Ain’t Missing You — Juan Soto and Josh Bell have been gone a little over a month and they’re not lighting the world on fire in San Diego just yet. Soto’s hitting .256 with three homers and six RBI while scoring 20 runs over 26 games. Bell is batting .181 with two homers and nine RBI with 19 runs scored in 29 games. Each still technically leads the Nats in a major category: Bell’s .301 batting average won’t hold up (his 437 plate appearances are 65 shy of the 502 needed to qualify) but Soto’s 21 homers just might (he’s six better than Lane Thomas at this time).

Digesting the Division — Two losses to the Nats drop the New York Mets (85-50) to one game above Atlanta (84-51) for the NL East lead. This past weekend the Mets began a 16-game stretch against clubs with losing records while the Braves play five of their next eight against sub-. 500 teams. Philadelphia (73-61) owns a 2 1/2-game lead over Milwaukee for the final playoff spot and may be in the middle of a 22-game stretch against losing teams, but Philly got swept in San Francisco after dropping two of three in Arizona. Miami (55-78) has lost seven straight and may be vying for the East Division cellar (it was their home five times from 2011 to 2019). The Nationals (47-87) may be going nowhere but in a season where they’ve yet to post a winning month are 3-1 in September.

Break up the Birds — An 11-18 finish by the O’s clinches their first winning season since 2016. And even though they lost Sunday to the Los Angeles Angels, dropping 2 1/2 games back in the race for the third Wildcard spot in the AL, the Orioles got another peek at the future with the MLB debut of Gunnar Henderson. Naturally, the infielder homered in his debut and hit .316 in his first five games at the Major League level. This week they host Toronto (they’re 6-3 against the Blue Jays this year) and Boston (they’re 7-6 against the Sox in 2022).

Last Week’s Humbled — Josiah Gray allowed six runs over five innings in his start and hasn’t won since July 6. Steve Cishek posted an ERA of 22.50 (allowing a grand slam will do that to a reliever’s numbers). Nelson Cruz hit .231.

Game to Watch — Patrick Corbin has won back-to-back starts and while he could still post 20 losses, the lefthander has been fun to watch as of late. Friday he starts at Philadelphia against Noah Syndergaard, who’s 3-1 with a 4.63 ERA since coming over from the Los Angeles Angels. With the Phils clinging to the final playoff spot in the NL, there’s a little extra juice to this series, if the Nats can play the spoiler.

Game to Miss — Sunday the Nats wrap up their series in Philadelphia with Anibal Sanchez slated to pitch the 1:05 start. Of course, at 1 p.m. all eyes will be on FedEx Field as the Washington Commanders make their regular season debut (with the new name). While this area might not be the burgundy and gold-centric place it was when I moved here in 2000, they still matter. 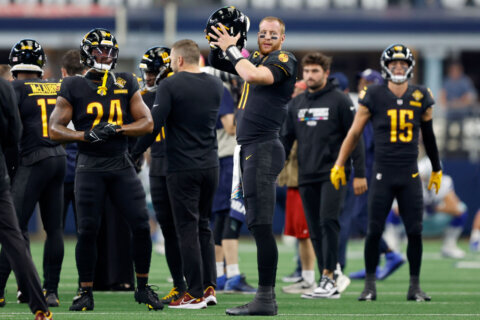 Column: The truth about the Washington Commanders 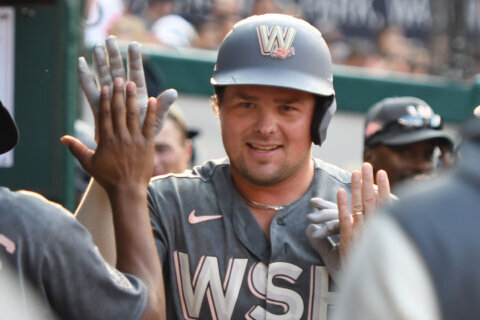 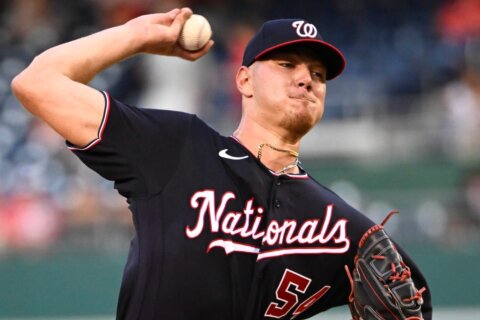