Companies will be a key presence in the 2022 midterm elections, but not in the way you might think.
Listen now to WTOP News WTOP.com | Alexa | Google Home | WTOP App | 103.5 FM

Companies will be a key presence in the 2022 midterm elections, but not in the way you might think. Thousands of companies are already working to register voters or make it easier for them to get to the polls.

Nonpartisan civic participation is catching on among companies—including many well-known global brands—as one more aspect of good corporate citizenship. The trend comes amid an increasing body of research showing that employees and consumers want companies to declare where they stand on social issues and participate in policy debates.

Equally interesting is that many Americans trust their employer and view them as an accurate source of information—more so than media, government and other traditional U.S. institutions. 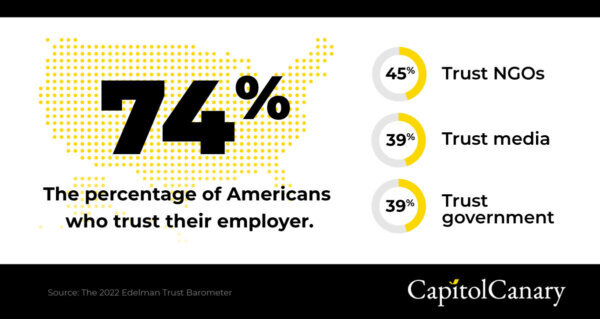 Taken together, all of this research shows that corporate activism, in the election and elsewhere, is becoming a market expectation and that companies are responding.

The Edelman Trust Barometer, which has measured trust worldwide for more than two decades, shows that 74% of Americans trust their employer, far more than they trust the U.S. government (39%), the media (39%), and non-governmental organizations such as charities (45%).

As the report put it, “societal leadership is now a core function of business.”

While companies often sat out of elections in decades past, fearful of alienating customers and employees, many are now leaning into civic participation. So much so that multiple organizations have formed in the last few years that encourage companies to make it easier for employees to vote.

For example, Electionday.org, a group of companies that facilitates employee voting, boasts a member base of over 1,000 companies, including Airbnb, Patagonia, T-Mobile and Twitter. Time to Vote, which has a similar agenda, attracted almost 2,000 members.

Additionally, advocacy software companies such as Capitol Canary note that an increasing number of clients now recognize the role companies can play and are communicating directly with employees about election-related matters. The majority of this communication is to provide information that makes it easier to register to vote and navigate complicated ballots. 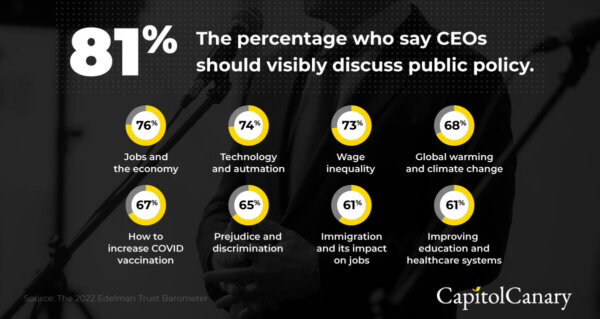 The focus on civic participation comes at a time when companies have become far more active in public policy. One need only look at recent events to find examples.

When Ukraine was invaded, hundreds of companies suspended business in Russia, including Coca-Cola, McDonalds, Netflix, PepsiCo and Starbucks. In response to mass shootings in the U.S., hundreds of CEOs signed a letter to the Senate in June calling for gun safety legislation, including executives from Condé Nast, Intuit, NerdWallet, Ben & Jerry’s and Unilever.

When the U.S. Supreme Court signaled it would end federal abortion rights, leaving them in the hands of each state, many companies began examining policies to cover expenses for employees who had to travel in order to receive an abortion. Among those companies were DoorDash, Microsoft, PayPal, Tesla, Yelp and others.

“Given what is at stake, business leaders need to make their voices heard and act to protect the health and well-being of our employees,” Levi Strauss & Co. said in a statement. “That means protecting reproductive rights.”

Given all this, it is not surprising that companies would weigh in on something as simple as participating in the democratic process. Helping people vote is simply one more way that companies can publicly display their values. Moreover, that help is likely to be appreciated because this year’s election is both complex and consequential.

November’s outcome will determine which party controls Congress, which will in turn determine the future of President Joe Biden’s agenda and set the stage for the 2024 presidential contest. And that’s just at the federal level.

Nationwide, there will be gubernatorial elections in 36 states, state legislative races in 46 states and many other down-ballot races. In total, there are about 7,000 seats and more than 18,000 candidates on the ballot nationwide.

Voting laws have also changed in many states, and decennial redistricting will ensure that roughly 110 million people vote from a new federal, state or local district. Casting an informed ballot may not be such a simple act this year.

But there are other reasons that companies choose to get involved in get-out-the-vote efforts. After the last midterm election in 2018, researchers Ashley Spillane and Sofia Gross studied corporate voter turnout efforts at Harvard’s Kennedy School. They looked at programs run by eight companies and found that these efforts increased brand awareness and strengthened relationships with employees.

“We know politics at work can be tricky, but there’s evidence that corporate political engagement is beneficial to businesses,” they wrote in Harvard Business Review, adding, “Our study finds a sweet spot for firms: being pro-democracy and pro-voter, without being partisan.”

One participant in the Harvard study put it this way: “We had to ask ourselves, ‘Are we taking a risk by not engaging? By not celebrating Election Day?’ I do think doing nothing is the real business risk now.”

To learn more about how your company can talk to employees and other stakeholders about the election, download the Capitol Canary whitepaper, GOTV for Corporations. 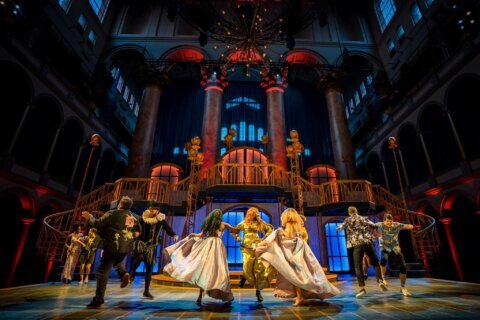 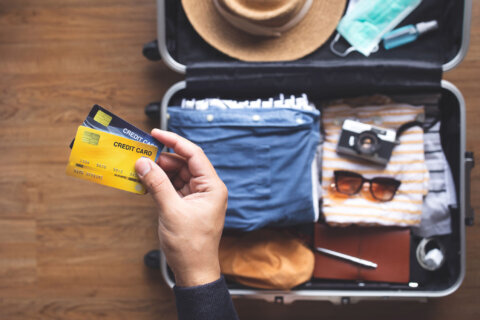 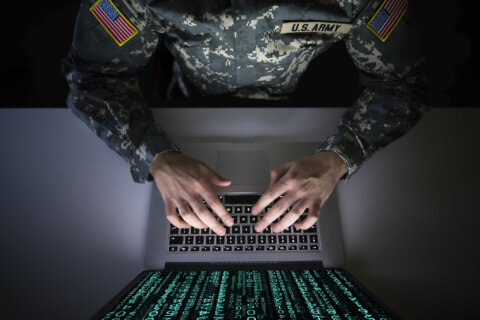 5 Qs with Shulman Rogers’ Mark Maier: Why boots on the ground matter in helping federal contractors