After years of complaints, Instagram users have finally won one of their biggest battles. Meta, Instagram's parent company, announced Wednesday that the app will bring back the option to view certain feeds chronologically, almost five years after the switch was made to an algorithm-curated feed.
Listen now to WTOP News WTOP.com | Alexa | Google Home | WTOP App | 103.5 FM

After years of complaints, Instagram users have finally won one of their biggest battles. Meta, Instagram’s parent company, announced Wednesday that the app will bring back the option to view certain feeds chronologically, almost five years after the switch was made to an algorithm-curated feed.

Previously, Instagram users were presented posts based on an algorithm that was designed to show the most relevant posts first. But the change prompted a wave of backlash when it was first announced, due to fears that it would bury recent posts in favor of higher-performing ones.

Now, Instagram has rolled out the Favorites and Following features. Choosing Favorites highlights posts from a list of people you choose while Following presents posts from the people you follow, but both options show posts in reverse chronological order, with most recent posts appearing first. 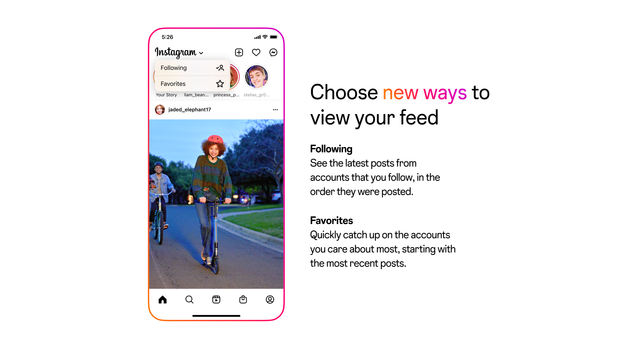 Instagram has announced new ways to view your feed.

“We’re always working on new ways to improve your Instagram experience,” Instagram said in a statement Wednesday. “We’ll continue to build features like Favorites and Following to give you more choice and control over what you see, and help make the time you spend on the app feel more intentional.”

The change was first floated by Instagram CEO Adam Mosseri in a 2021 Senate subcommittee investigation about Instagram’s role in keeping young users safe. Mosseri agreed that while targeted advertisements play a valuable role in user experience, users should have the right to experience Instagram with a chronological feed.

An Instagram spokesperson confirmed to CBS News that while chronological order is now an option, the algorithm-based feed will remain the default, so users will have to manually choose the Favorites or Following option.

“We know from research that people have a better experience on Instagram with a ranked feed, so we won’t be defaulting people into a chronological feed,” Instagram added.

The company also said it will still add recommended posts to the feed, but that these posts will be based on users’ interests and only be added “over time.”

The news comes only one week after Twitter also ditched its algorithm-ranked home page for a chronological view.

Phillies’ Bryce Harper asks for fan’s hat, trades his own