Kylian Mbappe has yet to join. There’s no sign of Lionel Messi becoming part of the “Toon Army,” either. Erling Haaland, meanwhile, has moved elsewhere in the Premier League.

Turns out it’s way too soon for Newcastle, the club which all of a sudden has the richest owners in soccer, being the new destination for the “galacticos” of the sport.

Indeed, given its low-key business in the transfer market this offseason, Newcastle is showing no obvious sign — to the layman, at least — of being one of the latest sporting playthings of Saudi Arabia’s sovereign wealth fund.

Look closer, though, and there is the occasional giveaway.

Like the choice of colors for the team’s third-choice uniform that was unveiled recently. With a green crest, badge and trim on an otherwise white shirt, it bears a striking resemblance to the uniform of Saudi Arabia’s national team.

Or the presence of a new sponsor on the sleeve of the jerseys being used for next season. That’d be noon.com, described as “the Middle East’s leading online shopping destination.”

It might be slower than widely predicted but change is happening at Newcastle, nearly a year since Saudi Arabia’s Public Investment Fund completed a 300 million pound (then $409 million) buyout of the club from northeast England after offering assurances to the Premier League that Saudi Crown Prince Mohammed bin Salman — and in turn, the state — would not have any say in the team.

It was one of the most drawn-out and controversial takeovers in the history of English soccer, immediately raising concerns about “sportswashing” — the use of sports to burnish Saudi Arabia’s image and downplay concerns about the kingdom’s human rights issues.

The initial outcry and questioning toward the leadership of the club — such as board members and the team’s manager, Eddie Howe — inevitably gave way to a focus on the soccer itself and Newcastle’s attempts to pull clear of relegation danger, with the team finding itself in next-to-last place at the time of the buyout.

Newcastle ultimately achieved safety with the minimum of fuss, helped by the shrewd acquisition of a number of players in the January transfer window. While two of them were relatively high profile in England right back Kieran Tripper and Brazil midfielder Bruno Guimaraes, the others — defenders Dan Burn and Matt Targett (loan), and striker Chris Wood — could hardly be called glamor signings and weren’t obvious upgrades on what was already in the squad.

The three players signed this offseason aren’t exactly headline-grabbers, either, even if Dutch center back Sven Botman comes highly rated from French club Lille and goalkeeper Nick Pope — joining from relegated Burnley — is a regular in England’s squad. The other was Targett, this time on a permanent deal.

Those running Newcastle have no intention of simply throwing loads of money at the best players in the world. For one, the Premier League has financial fair play rules stopping that from happening. Secondly, Newcastle does not yet have a stream of sponsorship deals to support heavier spending.

They are sure to come, though. And if Abu Dhabi-backed Manchester City and Qatari-owned Paris Saint-Germain are anything to go by, the biggest sponsors will likely come out of Saudi Arabia itself, even if there will be scrutiny on whether the deals represent fair market value.

So, in that respect, Newcastle at present is having nothing like the kind of immediate impact on soccer that the breakaway LIV Golf series — another sporting project backed by the Public Investment Fund’s wealth — is having on golf.

Expect Newcastle to push into the top half of the league this season, which starts with a home match against Nottingham Forest on Saturday, and even challenge for European qualification.

“It doesn’t intimidate me, but it is potentially a challenge for us — how we adapt to that pressure,” Howe said in preseason. “We’re not scared of that, we know it comes with the territory. But I think expectations have gone up.”

A spot in the Champions League might not be for another few years but that seems inevitable, too. Then the world’s superstar players may be tempted to head for St. James’ Park and the whole “sportswashing” dynamic will come into sharper focus.

There was a hint of what might be to come when Newcastle played preseason friendlies against two two German teams — Mainz and 1860 Munich. Sections of both teams’ fans protested against playing Newcastle, though that didn’t stop the matches from going ahead.

In the meantime, Newcastle continues to strengthen its backroom staff to become a more efficient and professional team. On the back of a new sporting director, Dan Ashworth, getting hired in February, Newcastle has a new CEO in Darren Eales as well as a new analyst, sports scientist and physiotherapist.

There has been some frustration in the transfer market — highly rated Reims striker Hugo Ekitike recently chose PSG over Newcastle, for example — but Howe’s squad looks to be in good shape heading into the new season.

Certainly, fears of getting relegated are a thing of the past. Instead, there is excitement swirling around an energized St. James’ Park that Newcastle will soon be a force to be reckoned with.

Even if questions from the outside about the source of Newcastle’s new-found wealth will never really go away. 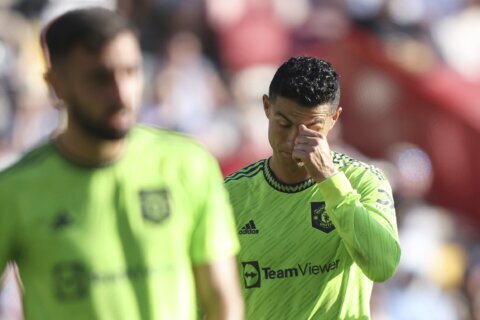