US to play England, Iran and possibly Ukraine at World Cup 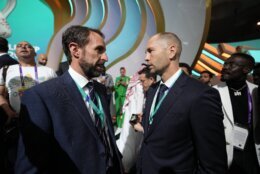 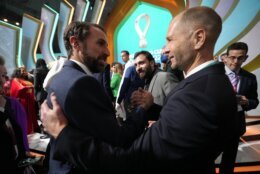 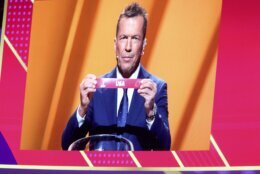 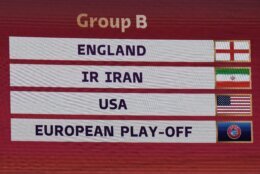 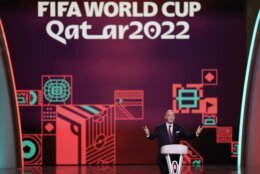 The United States was drawn to play England in a Black Friday match at the World Cup, a high-profile game that gives American soccer a chance to gain respect in its return to the global showcase.

“It’s the biggest stage in soccer that you can have, to play them in the World Cup and to be playing against players that people know,” midfielder Weston McKennie said after Friday’s draw.

“You can take a step forward in your player growth, in making yourself more known and also just making the team more respected, more looked at, more believed in,” McKennie said. “That’s the goal that (coach) Gregg (Berhalter) set out to accomplish when he took over. And that’s something that’s always reiterated whenever we go into camp, is change the way the world views American soccer, and I think there’s no better place and no better time to be able to do that.”

After failing to qualify for the 2018 tournament, the 15th-ranked U.S. will open in Qatar on Nov. 21 at Al Rayyan’s Ahmad bin Ali Stadium against the winner of a European playoff among Ukraine, Wales and Scotland. The Americans play No. 5 England four days later at Ahmad bin Ali Stadium in Al Khor and close the group stage against 21st-ranked Iran on Nov. 29 at Doha’s Al Thumama Stadium.

“It just makes me smile. I’m just excited for it,” Pulisic said. “I think we all are, and, yeah, just counting down the days really.”

Jesse Marsch, hired by Leeds on Feb. 28, had alluded to a respect factor when he said English players were more welcoming of Americans than British media. “From day one they accepted me. None of (them) made fun of my accent, like some of you,” he told reporters last month.

“You hear Jesse Marsch and some of his comments about what he has to go through, and at some point it’s almost too much,” Berhalter said. “You’re an established coach, you do really well and you’re not treated like that. Whereas, you’re from somewhere else, from Portugal, for example, you’d be treated completely differently. And Bob Bradley the same way. I know that there is a lot of respect for American soccer, but I think this an opportunity. For sure, this is an opportunity to show what we’re made of. And they have a good team, but so do we. We have a young team, we have an athletic team, we have a team that doesn’t have a lot of fear.”

In the group stage of the 1950 World Cup, the U.S. famously upset England 1-0 at Belo Horizonte, Brazil. The Americans opened the 2010 tournament with a 1-1 draw against the Three Lions at Rustenberg, South Africa.

“Their players, they’re household names, and then to see us match up against them I think will provide some context,” Berhalter said.

“We want to have an impact, obviously, on ourselves and our team, but ultimately on how soccer is viewed by the fans in the U.S. after the disappointment, after not qualifying for the last World Cup,” midfielder Tyler Adams said. “and then ultimately globally you want to gain the respect of some of the best footballing nations in the world.”

No. 39 Scotland hosts 27th-ranked Ukraine in June in a playoff delayed from March because of Russia’s attack on Ukraine. A few days later, the winner plays for a berth at No. 18 Wales, which advanced last week with a 2-1 win over Austria.

“If Ukraine even makes it there, it’s a wonderful accomplishment. I think if the people of Ukraine can get some hope by their team playing in the World Cup, it’s amazing,” Berhalter said. “It would be more of a celebration in my eyes than political ramifications.”

Since returning to the World Cup in 1990, the U.S. has one win, 11 losses and five draws against European opponents.

Iran upset the U.S. 2-1 at the 1998 World Cup in France, eliminating the Americans after their second game of the tournament.

The top two nations in each of the eight groups advance. Potential second-round opponents on Dec. 3 or 4 are Ecuador, Netherlands, Qatar or Senegal.

The USSF is trying to schedule opponents with similar styles for exhibitions in June and September. There also are two CONCACAF Nations League matches in June, and Berhalter plans to call in his top player pool.

FIFA met with coaches Friday and said roster size probably will expand from 23 to 26.

Nov. 15 is likely the first day Berhalter will have his entire roster available ahead of the opener, and he probably will scrap plans for a pretournament training camp in Dubai.

Notes: McKennie hopes to return to Juventus by the end of April after breaking two bones in his left foot during a Champions League match on Feb. 22. 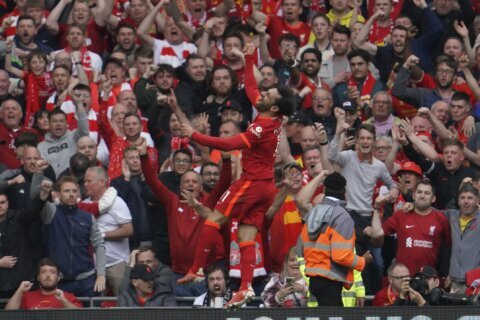