The United States showed promise but no ability to finish in its pandemic-delayed World Cup qualifying opener, drawing 0-0 at El Salvador on Thursday night in the type of Central American stadium that repeatedly has stymied the Americans.
Listen now to WTOP News WTOP.com | Alexa | Google Home | WTOP App | 103.5 FM
(1/14) 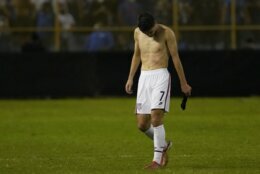 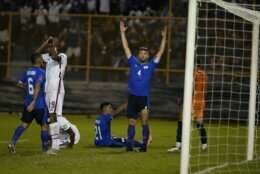 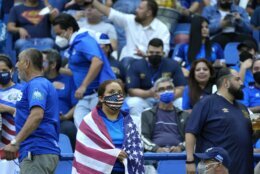 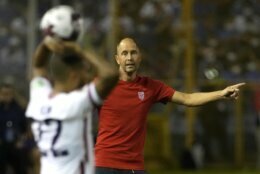 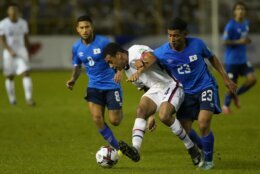 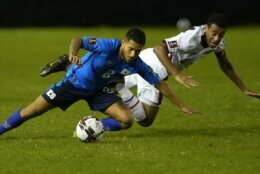 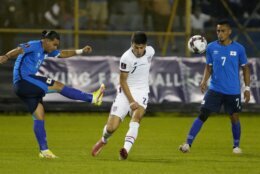 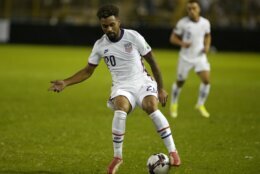 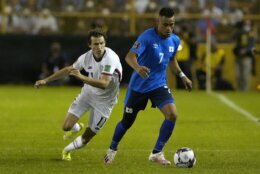 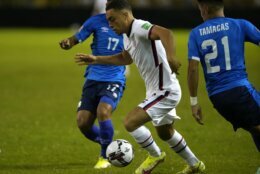 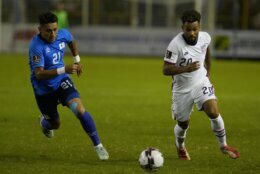 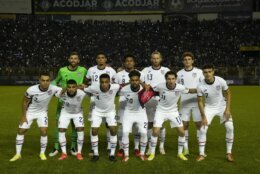 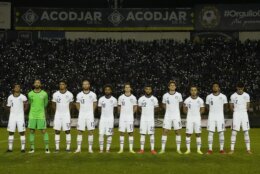 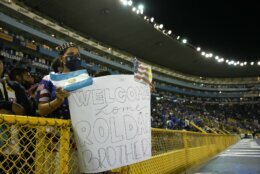 SAN SALVADOR, El Salvador (AP) — American players and the entire U.S. soccer community waited 1,424 days for this moment. Neither a triumph nor another tumble, the night showed problems mixed among promise.

“First reaction is disappointed,” defender Tim Ream said after a 0-0 draw at El Salvador on Thursday night in the opener of pandemic-delayed World Cup qualifying.

At the type of Central American stadium that repeatedly has stymied the Americans, fireworks started during El Salvador’s national anthem and lasted into the fifth minute. That energized an already boisterous crowd of about 29,000 that started filling Monumental Estadio Cuscatlán, Central America’s largest stadium, about 8 1/2 hours before kickoff.

American starters averaged 23 years, 282 days, the fourth-youngest in a qualifier in the modern era. Twelve Americans, included nine starters, made their qualifying debuts.

Right back DeAndre Yedlin, who started in the infamous 2-1 loss at Trinidad and Tobago in October 2017 that ended a streak of seven straight World Cup appearances, and Ream, a central defender who was on the bench in Couva that night, were the only holdovers.

Goalkeeper Matt Turner, who debuted in January, made a key stop when he was tested, diving to stop Eriq Zavaleta’s header from Marvin Monterroza’s corner kick in the 57th.

“I thought the fight was good,” Berhalter said. “The intention to win the game was good, but we’ve got to get better. We got to be more connected as a team and be able to finish our chances in a better way. … It was too much individual play, not enough switching field, not enough making them shift from side to side.”

Midfielder Tyler Adams, at 22 years, 200 days, became the youngest to captain the Americans in a qualifier in the modern era, beating Landon Donovan at 22 years, 219 day, against El Salvador in 2004.

“I’m not too dissatisfied, to be honest,” Adams said. “We knew coming into this week it was going to be a learning process.”

Asked for examples, he cited the experience of midfielder Gio Reyna.

“Gio going to take a corner, when he’s playing in Dortmund, he’s not getting hit with water bottles,” Adams said.

Ream had tried to warn his teammates what was ahead.

“A lot of these guys are used to playing on immaculate fields and pitches in Europe and it wasn’t going to be that,” he said. “Really, it’s just trying to make sure guys stay calm because we have a lot of different personalities, a lot of types, guys that can get frustrated and guys that can get anxious if things aren’t going the way they want them to. And my role and where I see myself is just trying to keep guys focused, keep guys calm and keep guys in the moment.”

Qualifying was delayed a year by the pandemic, and a compacted schedule has teams in the final round of North and Central America and the Caribbean playing 14 matches in seven months.

The U.S. plays next on Sunday in Nashville, Tennessee, against Canada, which opened with a 1-1 draw against visiting Honduras, then is at the Catrachos on Sept. 8.

Three of the eight nations in regional finals qualify for next year’s tournament in Qatar and fourth place advances to a playoff. But there rarely are easy games for the U.S. in Central America.

Riot police with helmets and shields were in front of the stands. Fans, most wearing blue home jerseys, were separated from the field by yellow chain-link fencing. Many held up the lights on their mobile phones, as if it were a rock concert.

Miles Robinson had the best chance in the first half, putting an open header over the crossbar in the ninth minute from Reyna’s free kick.

Weston McKennie couldn’t get his head solidly on Reyna’s cross in the 73rd, then crossed to Kellyn Acosta for a header that was punched away by diving Mario González in the 76th.

“It turned into too hectic of a game and I think we didn’t manage that well enough,” Berhalter said.

El Salvador was led by coach Hugo Pérez, who had 73 appearances for the U.S. from 1984-94. He recruited nephew Joshua Pérez, a teammate of Pulisic and Adams at the 2015 Under-17 World Cup.

Also on El Salvador is Álex Roldan, a brother and Seattle Sounders teammate of U.S. midfielder Cristian Roldan. Sitting in the stands, their mother wore an El Salvador jersey and their father a U.S.A. shirt

“We didn’t silence the fireworks, but we silenced the crowd a little bit by getting in their penalty box,” Berhalter said. “ There needs to be a calm that sets in after that initial period when we start taking over, and we never really had that.”

Notes: McKennie and Yedlin were given yellow cards for fouls in the second half. A second yellow in another game would cause a one-game suspension. … Mexico beat visiting Jamaica 2-1 on Henry Martin’s 89th minute goal. Alexis Vega scored for El Tri in the 50th, and Shamar Nicholson tied it in the 65th. … Canada came from behind in Toronto on a 66th-minute goal by Cyle Larin. Alexander López put the visitors ahead with a penalty kick in the 40th minute after Tajon Buchanan fouled Andy Najar. … Panama was held to a 0-0 draw by visiting Costa Rica. … CBS broadcast its initial U.S. qualifier and had its commentators call the game from a New York studio rather than on site, though it did have a sideline reporter in the stadium.