Scientists will be making observations and collecting data Aug. 21 from the earth and space, from points stationary and moving. The event will provide insight into solar mysteries science has yet to solve.
Listen now to WTOP News WTOP.com | Alexa | Google Home | WTOP App | 103.5 FM

WASHINGTON — It’s “all hands on deck” for NASA during Monday’s solar eclipse.

Scientists will be making observations and collecting data Aug. 21 from the earth and space, from points stationary and moving.

“What I’m really looking forward to are those B-57 eclipse-chasers,” said NASA solar system Ambassador Greg Redfern, referring to WB-57F research jets that will be deployed during the event. “In their noses, they have special cameras and telescopes.

“They’re going to be flying along at probably 600 miles an hour chasing that moon shadow at 40,000 feet.”

Astronauts on the International Space Station will be in a prime position to watch the eclipse shadow cross the continent.

“The space station is flying over three times to experience some form of the eclipse,” Redfern observed.

The only time the sun’s outer atmosphere, the corona, can be observed from Earth is during a full solar eclipse. Information collected from Earth Monday may provide insight into solar mysteries science has yet to solve.

“Scientists aren’t really sure,” Redfern said. “Why does the sun go from about 10,000 degrees Fahrenheit on its surface temperature up to a million degrees Fahrenheit just a couple hundred miles above the surface? We just don’t know.”

The eclipse also may impact the earth’s atmosphere and how radio signals behave. “Does it affect our ability to operate GPS signals?” Redfern pondered. A Virginia Tech professor will be collecting data on that.

During the eclipse, NASA TV will host a live four-hour broadcast
“Eclipse Across America: Through the Eyes of NASA,” featuring content from its many unique vantage points. 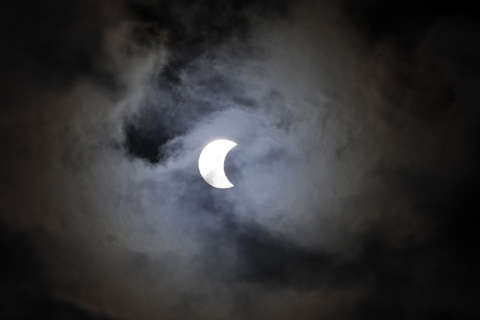