With cities largely emptied after hundreds of thousands have evacuated to safety, the young people who remain in Ukraine face loneliness and boredom as painful counterpoints to the fear and violence Moscow has unleashed on Ukraine.
Listen now to WTOP News WTOP.com | Alexa | Google Home | WTOP App | 103.5 FM
(1/21) 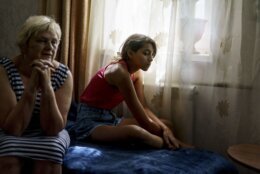 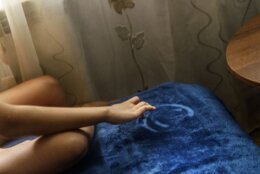 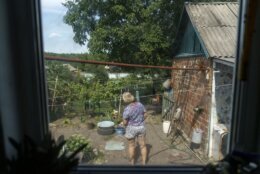 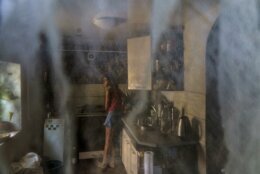 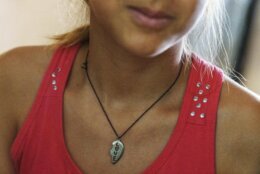 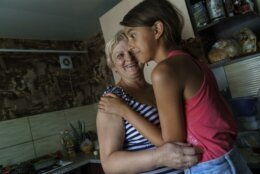 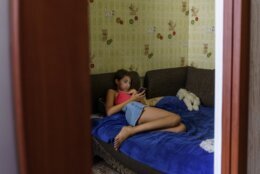 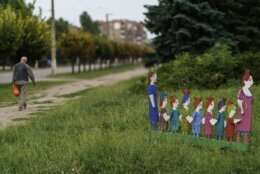 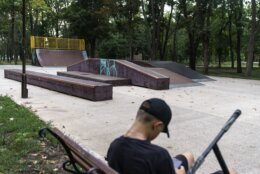 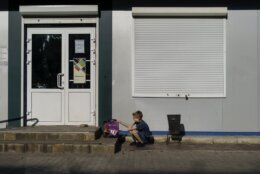 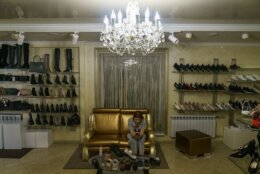 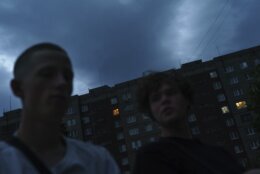 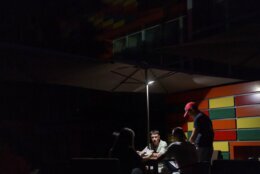 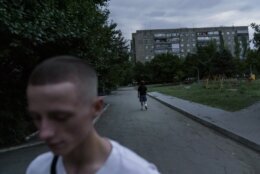 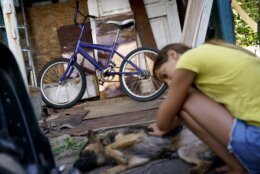 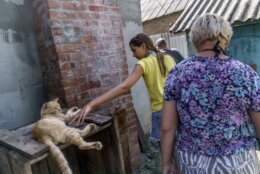 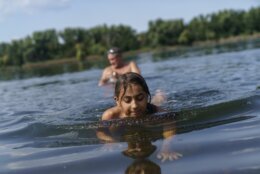 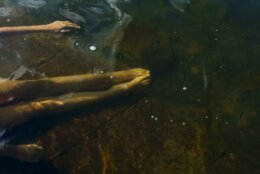 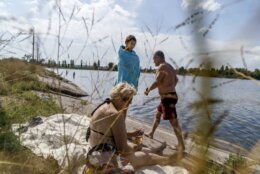 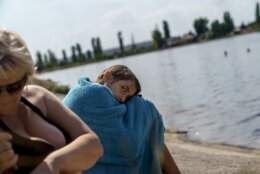 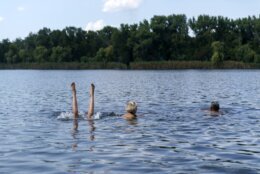 SLOVIANSK, Ukraine (AP) — Anastasiia Aleksandrova doesn’t even look up from her phone when the thunder of nearby artillery booms through the modest home the 12-year-old shares with her grandparents on the outskirts of Sloviansk in eastern Ukraine.

With no one her age left in her neighborhood and classes only online since Russia’s invasion, video games and social media have taken the place of the walks and bike rides she once enjoyed with friends who have since fled.

“She communicates less and goes out walking less. She usually stays at home playing games on her phone,” Anastasiia’s grandmother, Olena Aleksandrova, 57, said of the shy, lanky girl who likes to paint and has a picture of a Siberian tiger hanging on the wall of her bedroom.

Anastasiia’s retreat into digital technology to cope with the isolation and stress of war that rages on the front line just seven miles (12 kilometers) away is increasingly common among young people in Ukraine’s embattled Donetsk region.

With cities largely emptied after hundreds of thousands have evacuated to safety, the young people who remain face loneliness and boredom as painful counterpoints to the fear and violence Moscow has unleashed on Ukraine.

“I don’t have anyone to hang out with. I sit with the phone all day,” Anastasiia said from the bank of a lake where she sometimes swims with her grandparents. “My friends left and my life has changed. It became worse due to this war.”

More than 6 million Ukrainians, overwhelmingly women and children, have fled the country and millions more are internally displaced, according to the U.N. refugee agency.

The mass displacement has upended countless childhoods, not only for those having to start a new life after seeking safety elsewhere, but also for the thousands who stayed behind.

In the industrial city of Kramatorsk, seven miles (12 kilometers) south of Sloviansk, the friendship between 19-year-old Roman Kovalenko and 18-year-old Oleksandr Pruzhyna has become closer as all of their other friends have left the city.

The two teenagers walk together through the mostly deserted city, sitting to talk on park benches. Both described being cut off from the social lives they enjoyed before the war.

“It’s a completely different feeling when you go outside. There is almost no one on the streets, I have the feeling of being in an apocalypse,” said Pruzhyna, who lost his job at a barber shop after the invasion and now spends most of his time at home playing computer games.

“I feel like everything I was going to do became impossible, everything collapsed in an instant.”

According to official figures, 361 children have been killed in Ukraine since Russia launched its war on Feb. 24, and 711 others have been injured.

Authorities are urging all remaining families in Donetsk, but especially those with children, to evacuate immediately as Russian forces continue to bombard civilian areas as they press for control of the region.

A special police force has been tasked with individually contacting households with children and urging them to flee to safer areas, Kyrylenko said.

“As a father, I feel that children should not be in the Donetsk region,” he said. “This is an active war zone.”

In Kramatorsk, 16-year-old Sofia Mariia Bondar spends most days sitting in the shoe section of a clothing shop where her mother works.

A pianist and singer who wants to study art at university after she finishes her final year of high school, Sofia Mariia said there is “nowhere to go and nothing to do” now that her friends have left.

“I wish I could go back in time and make everything like it was before. I understand that most of my friends who left will never come back, no matter what happens in the future,” she said. “Of course it’s very sad that I can’t have all the fun like other teenagers do, but I can’t do anything about it, only cope with it.”

Her mother, Viktoriia, said that since the city has mostly emptied out, she manages to sell only one or two items per week.

But with the danger of shelling and soldiers plying the streets, her daughter is no longer allowed to go out alone and spends most of her time by her mother’s side in the store or at their home on the outskirts of Kramatorsk where the threat of rocket strikes is lower.

“I keep her near me all the time so that in case something happens, at least we will be together,” she said.

Of the roughly 18,000 school-age children in Kramatorsk before Russia’s invasion, only around 3,200 remain, including 600 preschoolers, said the city’s head of military administration, Oleksandr Goncharenko.

While officials continue to push residents to evacuate and provide information on transportation and accommodation, “parents cannot be forced to leave with their children,” Goncharenko said. When the school semester begins on Sept. 1, he said lessons will be offered online for those who stay.

Before the war, he said, he and his friends would do tricks in the bustling park alongside many other children. But now his only connection to his friends — who have fled to countries like Poland and Germany — is on social media.

He’s taken up other solitary activities just to keep himself busy, he said.

“It’s very sad not to see my friends. I haven’t seen my best friend for more than four months,” he said. “I started cycling at home so I don’t miss them as much.”

In Sloviansk, 12-year-old Anastasiia said she can’t remember the last time she played with someone her own age, but she’s made some new friends through the games she plays online.

“It’s not the same. It’s way better to go outside to play with your friends than just talking online,” she said.

Her best friend, Yeva, used to live on her street, but has evacuated with her family to Lviv in western Ukraine.

Anastasiia wears a silver pendant around her neck — half of a broken heart with the word “Love” engraved on the front — and Yeva, she said, wears the other half.

“I never take it off, and Yeva doesn’t either,” she said.