DONETSK REGION, Ukaine (AP) — All over the Donetsk region, close to the front lines of Russia’s war in Ukraine, Nataliia Voronkova turns up at Ukrainian field positions and hospitals wearing high heels. A colleague bought her running shoes, but Voronkova gave them away.

A helmet and a protective vest aren’t part of her uniform, either, as she distributes first-aid kits and other equipment to Ukrainian soldiers and paramedics. She is a civilian, the founder of a medical non-profit, and looking like one is something no one can take from her, even in a combat zone.

“I am myself, and I will never give up my heels for anything,” Voronkova said of the red strappy sandals, beige pumps and other elegant footwear she typically pairs with full skirts and midi dresses as she makes her dangerous rounds to secret military bases and mobile medical units.

The former adviser to the Ukrainian Defense Ministry with graduate degrees in banking and finance is a familiar sight to officers and troops in eastern Ukraine. For eight years after Moscow seized Ukraine’s Crimean Peninsula in 2014, Voronkova dedicated her life to providing tactical medical training and equipment for Ukrainian forces fighting pro-Russia separatists.

Working on their own, Voronkova and her assistant, Yevhen Veselov, drive a van filled with donated supplies – everything from night vision goggles and battlefield basics like tourniquets and medical staplers to the advances equipment needed for brain surgery — swiftly through checkpoints, irrespective of curfews. Servicemen recognize Voronkova and with one look, let them through.

The smell of her sweet cherry cigarillos fills the air when she gets out of her van to smoke one with her manicured red nails. Although she manages 20 people and lives in Kyiv, Voronkova has been in eastern Ukraine since the Russians focused their attention there in April, and she insists on delivering first-aid kits to the front line herself.

“A woman is like the neck of the head. She moves everything,” she said.

Voronkova grew up loving medicine, but her family did not want her to pursue it. They were bankers and thought she should take the same career path. The separatist conflict that started in 2014 persuaded her to study combat medicine, and she eventually received certification as an instructor.

From 2015 until Russia invaded Ukraine, the Ukrainian Defense Ministry tasked her with finding solutions to problems encountered by army units in the Donbas. Now, she uses her own teaching techniques to help the units protect themselves and their comrades in battle.

“I still remind my mother that when I was in 10th grade, I had a box filled with (over-the-counter) pills, and all my friends at school knew I had medicine for everything,” she said. “Unfortunately, I could not pursue my dream. But today I am implementing it by giving aid.”

Martial law has swelled the ranks of Ukraine’s defenders, but many of the people who have joined the military during the war entering its sixth month do not have combat experience or the supplies they need.

“It feels like 2014. We need first-aid kits and uniforms for the territorial defense. I think it was created with hardly any time to allocate a budget for them. Therefore, they need support from volunteers,” Voronkova says.

As she brought boxes of scalpels, electrocoagulation devices, emergency catheters and other supplies to a hospital in the city of Kurakhove, the roar of outgoing rockets and incoming shelling did not make her flinch.

In her tactical medical class, Voronkova commands a room filled with soldiers, paramedics, and technicians spanning a range of ages. She grabs their attention with her loud voice, humor and experience. Air raid sirens blasted as she taught a class in Dobropillia, but she went on with her lesson in an underground bomb shelter.

The training she provides has become more crucial during the long battle for Ukraine’s Donbas region, where Russian forces have both carried out relentless air strikes and shelling but also engaged in street-by-street fighting as they try to seize control of villages, cities and towns.

Voronkova thinks the opportunity for Ukraine’s government to work out a peaceful solution with Moscow has long passed and “at the moment, the price of victory is our lives.”

During her travels around Donetsk, in Bakhmut, Sloviansk, Kramatorsk, Toretsk and other places Russia hopes to capture, she meets and gives advice to everyone from high-ranking officers to paramedics. The male officers listen, and the young medics open up to her about their experiences.

“Every evening when I go to sleep, I ask myself, ‘What good thing have I done today?’ she said. “I want people to understand that they come into this world not only to eat, drink, and have fun every day, but to do something good. No day should be wasted.” 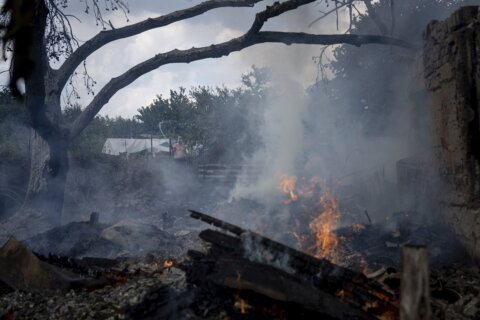