In wheelchairs and on stretchers, in ambulances and on train station platforms, they wait. Medical workers pull out ramps and wheel the patients onto the specially equipped train that will carry them westwards, away from the fighting raging in eastern Ukraine.
Listen now to WTOP News WTOP.com | Alexa | Google Home | WTOP App | 103.5 FM
(1/10) 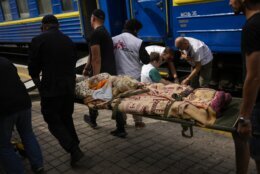 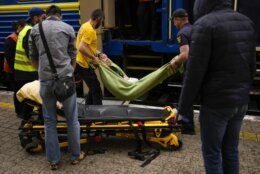 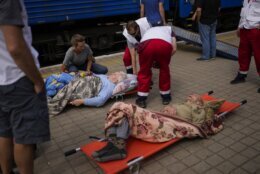 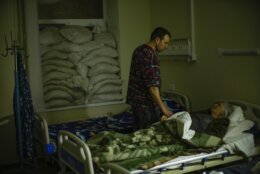 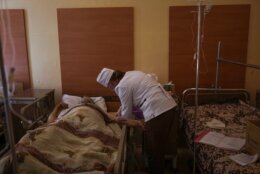 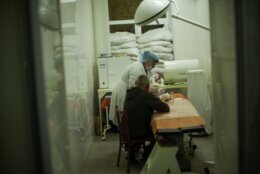 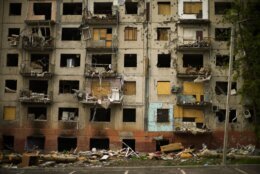 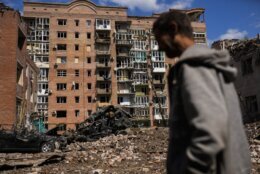 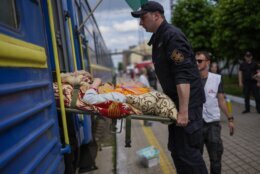 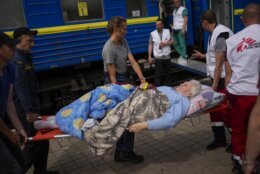 POKROVSK, Ukraine (AP) — In wheelchairs and on stretchers, in ambulances and on train station platforms, they wait. Medical workers pull out ramps and wheel the patients onto the specially equipped train that will carry them westwards, away from the fighting raging in eastern Ukraine.

Run by the aid organization Medecins Sans Frontieres (Doctors Without Borders), the train is a lifeline for the overwhelmed hospitals in cities and towns near Ukraine’s front lines that are struggling to cope with an influx of war wounded on top of their usual flow of sick patients.

“Since the beginning of the war, the hospital capacity in the east is under pressure,” said Yasser Kamaledin, MSF’s emergency project coordinator for the medical evacuation train, which includes an intensive care unit.

“The idea of this activity is to support the hospitals that are closer to the front line, to empty some bed capacity so they can receive more patients from the attacks, the conflict, but also other chronic patients,” Kamaledin said.

Since it started running on March 31, the train has ferried nearly 600 people to hospitals in safer areas of western Ukraine, he said, including around 30 more people on Sunday.

They included 40-year-old Mykola Pastukh. He was wounded Saturday near Sievierodonetsk by a mortar shell that landed as he tried to ferry humanitarian aid into the city, which has been under fierce attack as Russian forces intensify their efforts to seize Ukrainian territory in the east.

There was still shrapnel inside him, he said as he stood on the train platform nursing his right arm in a sling under his shirt. He needed surgery but the hospital in Lysychansk, a city close to Sievierodonetsk that was also under fierce Russian attack, just couldn’t cope. So he was being evacuated to Lviv in western Ukraine for the operation.

There are other, regular evacuation trains going west and onto which older people and the sick are boarded, but the MSF train is especially equipped to care for patients.

The pressure on Ukraine’s eastern hospitals is most evident after an attack, when casualties arrive one after the other.

Last week, medics wheeled a patient with severe head injuries into the hospital in the town of Pokrovsk as doctors, jaws clenched, triaged patients who were wounded when two rockets landed.

There were only a handful of wounded people. But the hospital is stretched. It has been operating with around half the staff it used to have, working with a backdrop of sandbags stacked up against boarded-up windows.

Before the war “when there was normal work, we had 10 surgeons, now we have five,” said Dr. Ivan Mozhaiev. In his department, the 32-year-old is the only surgeon who remained out of five.

The radical change in the nature of their work since Russia invaded Ukraine on Feb. 24 has added an extra strain on the doctors and nurses who remain in hospitals near the fighting.

“Earlier we treated people from illnesses, sometimes there were traumas. Now we have to treat people from gunshot wounds,” said Dr. Viktor Krikliy, head of surgery at a hospital in the eastern city of Kramatorsk.

The city itself has come under attack, including on April 8, when a missile struck Kramatorsk train station, killing more than 50 people and wounding more than 100.

Many medical staff have left, and the hospital has had to shut down several departments while still providing care for people from the city and nearby towns. Krikliy’s section of the hospital has two surgery departments, which each used to have 15 surgeons. Now there are only six left for both. It’s the same with nurses, with units operating on around half the staff levels they had before the war.

Kramatorsk hospital, in the Donetsk region of Ukraine, has had to deal with war injuries before. The region, along with neighboring Luhansk, is part of the Donbas, where Russia-backed separatists began fighting Ukrainian forces in 2014 and have controlled sections of eastern Ukraine since then.

Krikliy had to operate on the wounded then too, “but the scale now and then is incomparable,” he said. In 2014, it was soldiers, but this is the first time that the medical staff in Kramatorsk are seeing many wounded civilians.

“We could not even dream in the most terrible nightmare” that civilians in Ukraine would suffer such injuries, he said, describing having to operate on young children whose limbs were blown off by explosions.

Despite the danger, and the physical and emotional toll of working under such conditions, Krikliy has no intentions of leaving.

“We are surgeons. Our task is to operate on the people and treat them. If everyone leaves, who is supposed to do the job?” he said. “Nobody says we are a suicide squad or looking for a way to die somewhere. But … we do our job. And we will continue to do so.”