An overnight closure along U.S. 15 in Haymarket will prepare a new interchange with Interstate 66 to be opened to traffic. The interchange will put drivers on 'wrong' side of road.
Listen now to WTOP News WTOP.com | Alexa | Google Home | WTOP App | 103.5 FM

WASHINGTON — A new interchange at U.S. 15 and Interstate 66 is set to open Saturday morning and will put drivers on what may seem like the wrong side of the road.

The final round of work will include painted pavement markings that drivers should follow as the lanes of U.S. 15 shift from the right side of the road to the left side on one of two overpasses and then shift back to the right on the other side of I-66.

Beginning around 8 p.m. Friday night, traffic on U.S. 15 in Haymarket will follow a detour onto Heathcote Boulevard and Old Carolina Road.

Two of the three lanes in each direction on U.S. 15 are scheduled to open by 9 a.m. Saturday. The third lanes won’t open until the spring when work on a shared-use path and overhead signs is finished and additional work is completed on the traffic lights.

“So it is still a work zone … but even opening as a two-lane … is still going to flush traffic through that intersection a lot faster than the traditional interchange that exists now,” Kamilakis said.

The new interchange includes new ramps to and from I-66. The $59 million project is currently $5 million under budget.

Watch a video of how the interchange, known as a diverging diamond, works: 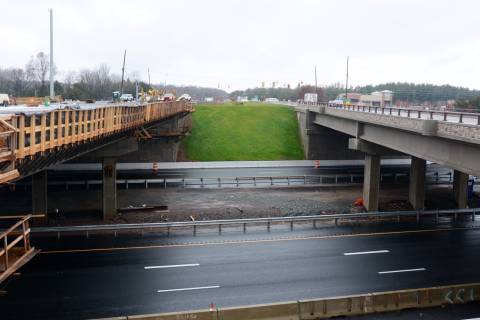