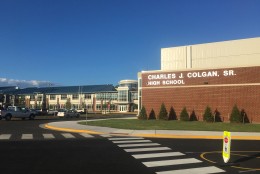 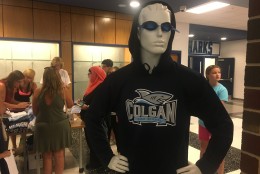 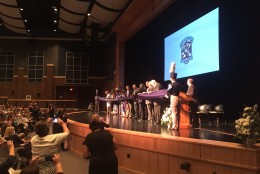 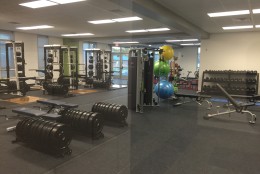 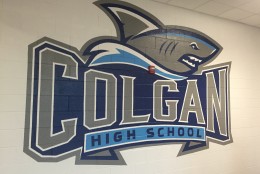 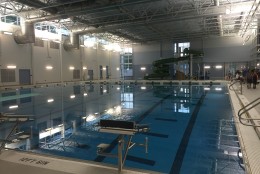 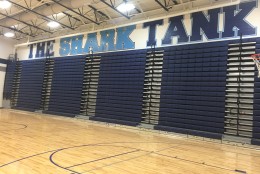 “No one could have been prouder of this honor than our father. Out of all the accolades he has received, this one is the most moving for him,” said Ray Colgan, son of the former State Senator Charles Colgan, the school’s namesake.

The school which cost $110 million to build can hold 2,200 students and is home to a state-of-the-art performing arts center and a new county-run aquatic center.

The school will open with students in grades 9 to 11, which means in two years, the schools 11th–graders will become members of the first graduating class.

“I am so excited, we get to make history, it’s a unique opportunity,” said Loza Teodros, 16, who is in the 11th grade.

With the help of guides, students and parents took tours of the large campus. Others became the first to purchase sweaters and T-shirts featuring the school’s logo and mascot, the shark.

“The school is huge, and I am definitely going to get lost on the first day,” said Jada Funderburk, 14, who will be a 9th-grader at Colgan.

The Manassas school is one of two new schools in Prince William County, the other is Kyle R. Wilson Elementary School in Woodbridge, which will be dedicated on Tuesday.

The county will also rededicate a Dale City middle school, which was at the center of a controversial name change.  The school was named after Mills E. Godwin, a former Virginia governor who was at one time a segregationist. The school board voted to instead name the middle school after Dr. George Hampton.

“Our goal is to make the namesakes of these schools somebody that all our students can look up to,” said Phil Kavits, spokesman for Prince William County Schools.

Students in Prince William County will go back to class Monday, Aug. 29.