The area contains what is believed to be the final resting spot of more than 500 enslaved individuals and African Americans, who worked and lived on the church’s land.
Listen now to WTOP News WTOP.com | Alexa | Google Home | WTOP App | 103.5 FM

On the side of a steep hill and in the brush behind the chapel at the Sacred Heart Catholic Church in Bowie, Maryland, members of the community showed up on Martin Luther King Jr. Day to help clear away the overgrowth and document a huge number of grave sites.

The area contains what is believed to be the final resting spot of more than 500 enslaved African Americans who worked and lived on the church’s land.

Despite the cold, dozens showed up to use chain saws to remove limbs and trees and used rakes to move leaves, identifying possible grave markers at the site.

Many community members showed up to help.

One by one, teams searched the brush, with members shouting, “Stone,” whenever a possible grave marker was located.

Catholic University assisted in the search, and Laura Masur, an assistant professor of anthropology, oversaw the grave identification process.

While most are accustomed to grave sites marked with headstones, similar to those that sit in the church’s graveyard nearby, Masur said for people who were enslaved, it wasn’t uncommon for them to mark graves with rocks or other objects. The crowd was instructed not to move anything suspected of being a grave marker.

Masur said it is not uncommon to find burials in this kind of place.

Masur suspects that over time, more than 500 graves could be discovered around the church. Using ground-penetrating radar, Masur said more than 150 have already been documented. 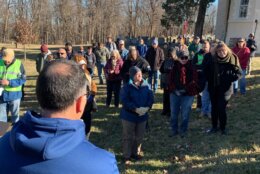 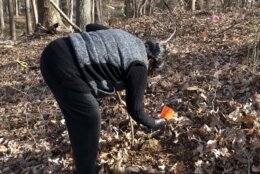 Rabbi Steve Weisman, of Temple Solel, said he came out after hearing about the effort on WTOP.

Toni Moore-Duggan goes to St. Ignatius Catholic Church in Baltimore and came out to help with the search. She was among the first to find an unmarked stone, which may indicate a grave.

“These are lives, and we are related, and these people came over here against their will. And I want their lives to have meaning, to know that all this that we are doing today is because of them, and it matters. They matter, and their work was not in vain,” Moore-Duggan said.

Once the graves are identified, the church said it plans to work with descendants and others and decide on how to best honor the people buried on Sacred Heart Catholic Church’s hillside.