On Sunday morning, firefighters from all across the D.C. area climbed 110 stories worth of stairs at the Gaylord National Resort in Prince George’s County, Maryland, to replicate the climb to the top of the Twin Towers.
Listen now to WTOP News WTOP.com | Alexa | Google Home | WTOP App | 103.5 FM
(1/6) 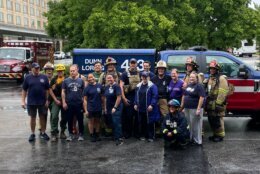 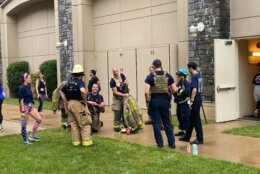 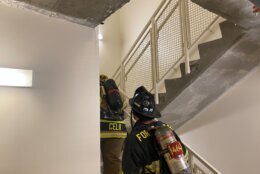 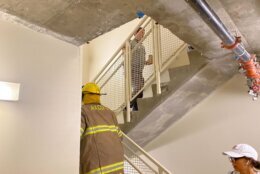 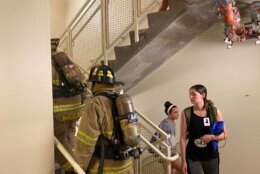 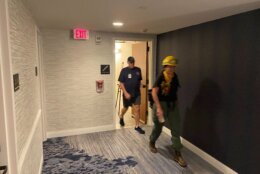 It’s been 21 years ago since the terror attacks on 9/11. That day, 343 New York firefighters died at the World Trade Center.

On Sunday morning, firefighters from all across the D.C. area climbed 110 stories worth of stairs at the Gaylord National Resort in Prince George’s County, Maryland, to replicate the climb to the top of the Twin Towers.

Each person who climbed carried a tag with a name and picture of a firefighter who died that day.

When they finish climbing the 110 stories, then they ring a bell and read the name of the fallen firefighter.

“So when you climb, you climb to honor that firefighter, and you get to take that badge home with you,” said Bill Hinton with the National Fallen Firefighters Foundation, which organized the event with the Prince George’s County Fire Department.

Danielle Celli with the Spotsylvania County Fire Department has done multiple climbs a year for the past 12 years.

Around 100 other firefighters and other volunteers did the climb up the narrow stairwell to the top of the Gaylord National and went back down 10 times.

Other area departments were well represented, with many showing up from Fairfax County, D.C., Fort Belvoir, Montgomery County and Calvery County, to name a few.

Many of the firefighters were suited up in full gear, adding an extra 63 pounds to their load, according to Ryan Harper with the Fort Belvoir Fire and EMS.

“It’s humbling. A lot of the New York City firemen, they’re carrying stuff like high rise racks, water cans, search bags, search ropes, so they’re carrying a hell of a lot more weight than we are today. So certainly humbling and remembering their sacrifice. So it’s pretty light compared to what they carried,” said Harper.

Meanwhile, some who participated were too young even to remember the terror attacks.

“I think for people who like my age and younger, who don’t remember the event to get involved with events like this, just to help keep the memory alive and to remember it because even though I might not have physical memories of the day, it’s important to honor those who gave their lives,” said Calvert County Canine Search and Rescue’s Kita Konerth.

She made the climb up and even ran down the stairs rather than taking the elevator down with her friend, who is a Marine veteran.

“People have given their lives they’ve given the ultimate sacrifice, especially on a day like today. I served in Iraq. And so it’s, it just has a deeper meaning for me,” said Marine Zoey Rodrigues Keaton, who now owns a local gym. “And then at the end, you read somebody’s name, and you made that journey on their behalf. So every single one of those 343 firefighters (is) everybody’s hero. They should be everybody’s heroes.”

Another volunteer who made the 2,200-step journey was Republican candidate for Governor Dan Cox.

“It’s an honor to be here today and to experience, you know, the solemn remembrance from a perspective I hadn’t experienced before. And that was to climb 110 floors,” Cox told WTOP. “I’ll tell you what, it’s a respect every step you take. You realize what our first responders go through and on, particularly on that day.”

Volunteers who made the trek raised over $6,000 for the National Fallen Firefighters Foundation, which goes to support the families of firefighters who were killed in the line of duty.