African American Marylanders who helped expand freedom around the world through military service as far back as 1641 are the focus of the largest exhibit of its kind in U.S. history.
Listen now to WTOP News WTOP.com | Alexa | Google Home | WTOP App | 103.5 FM
(1/4) 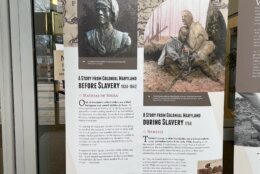 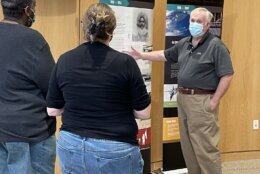 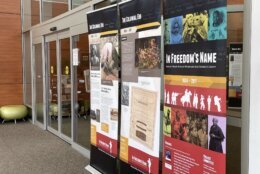 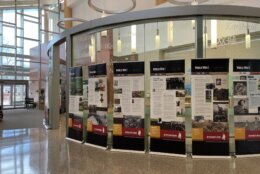 African American Marylanders who helped expand freedom around the world through military service as far back as 1641 are the focus of the largest exhibit of its kind in U.S. history.

The Prince George’s County Memorial Library System is hosting “In Freedom’s Name,” a traveling exhibit featuring 63 people’s stories on 38 panels that are each 7 feet high and 3 feet wide.

The exhibit is a joint venture between the Maryland Military Historical Society based at the Fifth Regiment Armory in Baltimore, whose mission is to tell the history of all of Maryland’s military actions, federal and state militia, and also Stevenson University in Owings Mills, Maryland.

“We started out thinking we could get the job done in about six or seven panels. And the more research we did, we got up to 38 panels,” said Glenn T. Johnston, who is a co-curator of the exhibit and chair of history and humanities at Stevenson University.

African American historian Louis S. Diggs, of Baltimore County, and Johnston shared in the history research and put the exhibit together after about three-and-a-half years of work.

The exhibit stretches the length of half a football field and features roughly 250 high-quality images. Visitors can start at the first panel and continue to the end, getting lost in just reading the stories, Johnston said.

“The other way to do it is just to walk around the exhibit, find an image, find a photo that captures your attention, go in and read the caption on the photo,” he said.

The intensity of an image that draws in Johnston features a Rosie the Riveter, who is working to build an airplane.

One of the panels features Harriet Tubman, who famously led a unit during the Civil War; another tells the story of Yeoman Sarah Davis, a native of Oxon Hill, Maryland, who served in the Navy during World War I. You also can learn about Robert Curbeam, an astronaut from Turner Station, Maryland, who was on several shuttle missions.

“In a few instances, in more recent history, we were able to actually get in touch with the people from the Vietnam era, and talk to them about their experiences and get materials from them,” Johnston said.

“But for the majority of the people in the exhibit from roughly 1641 to World War I, it’s just really hard to even begin to try and track down the descendants,” he said.

“In Freedom’s Name” will be on display through July. It next appears at the New Carrollton Branch Library between March 24 and April 26. It eventually will visit libraries in South Bowie, District Heights (Spauldings) and Oxon Hill.

A second exhibit, that will begin touring in mid-April, was created in collaboration with the Military Women’s Memorial.

“Color of Freedom: Honoring the Diversity of America’s Servicewomen” tells the stories of the sacrifices and contributions of minority women who served in or alongside the military throughout history.

You can learn more about both the touring exhibits on the Prince George’s County Memorial Library System website.