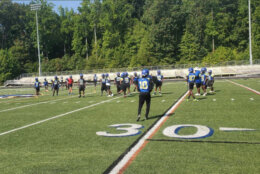 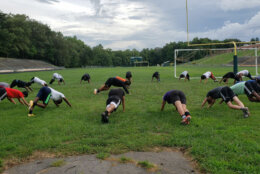 Amar Thomas loves football, and after missing a year of competing, he was thrilled to be reunited with his teammates to prepare for the upcoming season. The senior defensive end said the pandemic limited team bonding and hampered communication with his teammates.

Thomas, who plays for Dr. Henry Wise Jr. High School Upper Marlboro, Maryland, said he chose to get vaccinated against COVID-19 to avoid missing any more time with his teammates. Now, he hopes they make the same decision.

“I think that everyone should get vaccinated,” Thomas told WTOP.

In the spring, while fall sports began practice for the coming season, student-athletes had to work in small groups, with social distancing and mask requirements in full effect.

The mask rules were especially hard, Thomas said, “because we’re running back and forth, on and off the field, running down the field, plays, all that good stuff.”

Thomas said a vaccine mandate would mean players could go without masks and “breathe clear” on the field.

Starting Friday, fall athletes in Maryland public high schools will resume competition after a one-year hiatus due to the COVID-19 pandemic. In Prince George’s County, one of the jurisdictions hit the hardest by the coronavirus, student-athletes won’t be mandated to get vaccinated.

The Maryland State Board of Education gave each school district the flexibility to set its own COVID-19 guidance based on its COVID-19 restrictions.

Ahead of the school year, Prince George’s County required vaccines for school employees, including coaches. On Twitter, Shirley Diggs, the coordinating supervisor for PGCPS athletics, said masks are only required for student-athletes when they are not directly training — for example, while standing on the sidelines.

Fans and spectators are required to wear masks while at team events as well.

However, Diggs said in an email to WTOP that student-athletes are not required to be vaccinated to participate in fall sports at this time.

WTOP spoke to four student-athletes from two Prince George’s County public schools, and found they were divided on the county’s policies and vaccine mandates.

DaLawn Parrish, the head football coach at Wise, said most of his players are vaccinated against COVID-19. Some were recently motivated after an outbreak on an opposing team caused a cancellation.

“I think we almost didn’t really understand the jeopardy of it” until then, Parrish said. But others have refused.

The Pumas were the last 4A Maryland state football champions in 2019, and, brimming with possible college recruits, they look like early favorites again. Still, without a vaccination requirement, Parrish said, there could be an outbreak of cases that derail the season.

Charles County requires athletes to be vaccinated or to provide a medical or religious reason for exemption, as guidance. Fairfax County, Virginia, recently announced the same policy.

Parrish recommended looking at those counties as models.

“If you’re going to mandate that teachers have to get vaccinated, [if] you want to be safe for the kids, then have them get vaccinated,” Parrish said. “[If] they don’t want to play, don’t get vaccinated. But that’s my opinion.”

In Riverdale, the Parkdale High School boys soccer team is facing a similar problem. Head coach William Sama said he attempted to open a dialogue with parents who are still hesitant about getting their sons vaccinated. He said cultural and religious backgrounds have created a barrier.

“I personally would like and love for everyone to get vaccinated, just so that we sort of have a peace of mind,” Sama said. “But I do understand. I’m a very tolerant person. I’m very tolerant to different beliefs.”

The players have even been talking about vaccines on the sidelines. Parkdale midfielder Eyuel Reta said he got vaccinated just to be safe. After going through summer workouts with a mask on, the junior said he believed others would get it just to avoid wearing it again while playing.

“Some of my teammates don’t want to get vaccinated because they don’t trust it enough,” Reta said. “And I can kind of see where they come from. But I feel like everyone should be vaccinated just to be safe.”

The captains for both teams aren’t sold on the idea of a vaccine mandate for athletes.

Pumas quarterback Jayden Sauray is vaccinated, and was featured by the county in a social media campaign encouraging students to make the choice to get vaccinated.

“You can’t force somebody to do anything,” Sauray said.

Parkdale defender Bryan Coreas agreed that there shouldn’t be a mandate, although he is still “50-50” on playing athletes who have not been vaccinated.

“It could possibly mean a higher risk of getting a disease,” Coreas said.

It is unclear what the protocols are for rescheduling games postponed due to the ongoing pandemic. If games can’t be rescheduled and played, teams may not play the minimum amount needed to make the state playoffs.

Parrish said players and coaches need clarity from the school system. WTOP reached out to Diggs and PGCPS for its complete COVID-19 policies for the fall season. They did not respond ahead of this article’s publication.

“We missed a year; we want to stay here,” Thomas said. “We don’t want to go back home. We want to be in school. We just want to get on the field and compete.”