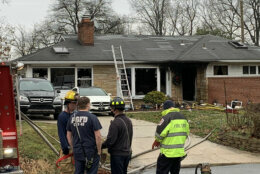 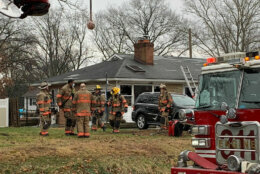 A fire tore though a Prince George’s County, Maryland, house on New Year’s Day, killing a woman and sending three other people, including an 8-year-old girl, to the hospital with serious injuries.

Prince George’s County firefighters were called to the one-story house in the 11300 block of Montgomery Road in Beltsville shortly after noon on Friday for a report of a house fire with a person trapped.

The fire was “well-advanced” and showing from the basement at the back of the house by the time firefighters arrived, fire department spokesman Michael Yourishin told WTOP.

The woman who died was found by firefighters and pronounced dead at the scene, Yourishin said.

Authorities said the house was shared by two families — one family lived upstairs and the other lived downstairs. The Red Cross and the Prince George’s County Office of Emergency Management is now assisting 10 people who lived in the house and who were displaced by the fire.

The fire left behind soot-blackened walls and charred Christmas decorations.

Daniel Pavon, a law enforcement chaplain who lives a few doors down, said his wife alerted him to the fire.

“She said, ‘Honey, there are children.’ So I came immediately,” he said, bringing blankets, coats and shoes for the children who escaped the burning house and took shelter in another neighbor’s home.

He said the fire happening on New Year’s Day “gets to your heart.”

Firefighters put out flames shortly after 12:30 p.m. Crews are still investigating the cause of the fire and where it originated.

Units from the Montgomery County Fire and Rescue Service also responded to the fire.

Below is a map showing the general location of the fire: