A 27-year-old man is accused of robbing a woman on the street after following her out of a Forestville, Maryland, bank on Nov. 4.
Listen now to WTOP News WTOP.com | Alexa | Google Home | WTOP App | 103.5 FM

A Suitland, Maryland, man faces multiple charges after a robbery that indirectly involved a bank.

Javon Clay, 27, is accused of robbing a woman on the street after following her out of a Forestville, Maryland, bank at about 9 a.m. on Nov. 4.

“We have really good surveillance video as well as close-up pictures,” Washington said.

Based on information gathered during the investigation, Washington said, detectives believe Clay targeted other victims after they left banks, and that those people might not have reported the crimes.

“We’re not sure if there are any other victims outstanding. But if there are, we’re asking them to come forward,” she said.

During the investigation, detectives discovered the Nov. 22 attempted robbery of a clerk at a business on Ritchie Road in Capitol Heights. Clay was charged in that case as well.

Clay has been charged with robbery, assault and theft and is being held without bond.

Anyone with information about this case or Clay is asked to call Prince George’s police detectives at 301-772-4925. Anonymous tips can be provided by contacting Crime Solvers online or by calling them at 866-411-TIPS (8477). 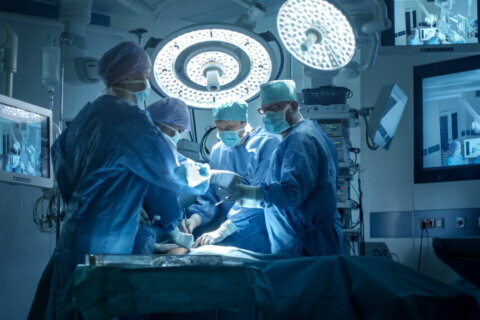