Holidays: 'Enchant' shines with millions of lights in Nats Park | Where to see holiday lights | Send in photos of decorations | How to give greener this season
Home » Prince George's County, MD News » Fatal stabbing of Army…

Fatal stabbing of Army lieutenant at U.Md. ‘for no other reason’ but race, prosecutor says

Prosecutors said Sean Urbanski, who is white, killed Lt. Richard Collins III because of his race. The defense acknowledged the stabbing happened, but that Urbanski was drunk and angry in general, not in a racist rage.
Listen now to WTOP News WTOP.com | Alexa | Google Home | WTOP App | 103.5 FM

Prosecutors on Wednesday said that Sean Urbanski, who is white, confronted and killed Army lieutenant Richard Collins III at a bus stop at the University of Maryland-College Park “for no reason other than he was black.”

Urbanski’s mind had been “poisoned” by hate, Abbott said, and on May 20, 2017, he was fueled by alcohol when he “walked up to [Collins], confronted him, for no reason other than he was black. A black man on the campus of the University of Maryland.”

Collins, days away from his graduation from Bowie State University, had been visiting with friends at the U.Md. campus that night. Urbanski, like Collins, had been drinking at bars along Route 1 in College Park.

Abbott said that after watching Collins for 10 minutes, Urbanski left the area, then came back, with a foldable knife open, and said: “Step left, step left if you know what’s good for you.” When Collins refused, Urbanski plunged the knife into Collins’ chest.

Video of the stabbing showed that Collins’ hands were still in his pockets when he was stabbed.

After stabbing Collins, Urbanski “stood there, admiring it for a minute,” then calmly folded up his knife, put it in his pocket, and sat down on a bench.

Jurors on Wednesday also saw racist memes recovered from Urbanski’s phone; one was entitled “N—– in a woodchipper.”

Abbott called on jurors to convict Urbanski of first-degree murder and a hate crime resulting in death. A first-degree murder conviction requires premeditation, and Abbott argued that the fact that Urbanski had his knife out as he walked up to Collins, and in fact walked past two other people to confront him, was proof of that.

Defense attorney William Brennan did not deny that Urbanski killed Collins; he called the incident “an unspeakable tragedy for all involved. It was devastating for the Collinses, who lost a son. And it will be devastating for the Urbanskis, who will lose a son,” implying that he was confident Urbanski would be convicted on at least some charges.

He said, however, that prosecutors “used race to divide this community.” He added, “There will be no evidence that Sean Urbanski advocated violence or hatred of anyone, mark my words.”

Brennan argued that Urbanski was drunk and angry, but not in a racist rage, and was too intoxicated to form the intent needed to convict him of first-degree murder.

“Witnesses will say he was angry — at who? No one knows.” Brennan suggested Urbanski felt “left out” because his U.Md. classmates were graduating, but he wasn’t. Outside the Terrapin Turtle bar, “He punched a wooden sign. You’ll see his bloody knuckles.” He added that witnesses will describe Urbanski as “yelling incoherently.”’

He said Urbanski’s blood alcohol content was three times Maryland’s legal limit of .08 at the time of the stabbing, and eight hours later, it was .10.

“The idea that Richard Collins was targeted is pure, unadulterated speculation,” Brennan said. He added that the police and the FBI investigated the case for more than two years and determined there wasn’t enough evidence to charge him with a federal hate crime.

Brennan said Urbanski had a handful of racist memes on his phone among thousands of pictures, and “there is no evidence Sean Urbanski looked at or downloaded” any such memes the night of the murder. “There was no manifesto. No evidence he ever marched, or protested.”

While acknowledging that Urbanski stabbed Collins — “it’s on the video” — Brennan asked the jury to reach an “appropriate” verdict.

The jury pool comprises 16 people, including alternates. Twelve are people of color; 12 are women.

Collins had been commissioned as a U.S. Army second lieutenant two days before he was stabbed.

The maximum sentence for a murder conviction in Maryland is life in prison with no parole, while the hate crime charge could add 20 years.

If Urbanski had been charged with a federal hate crime, he could have been eligible for the death penalty.

Collins’ parents, Dawn and Richard Collins, issued a statement earlier Wednesday saying “Richard’s future was bright, and we couldn’t be prouder of all he accomplished over the course of his short life,” the parents wrote. Collins “was devoted to a life of service to his country.”

They added, “Nothing will bring our son back, but we’re glad that the trial is finally starting and hope the criminal justice system will provide a measure of closure by bringing to justice the man responsible for Richard’s death to the fullest extent of the law.” 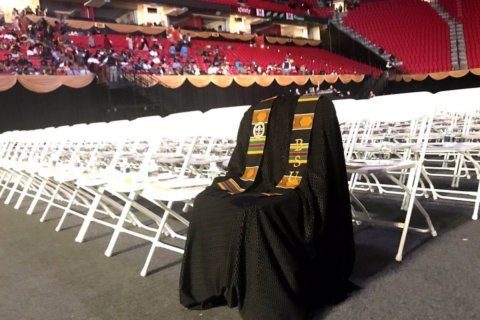