Opponents to Beltway, 270 toll lanes speak out at town hall 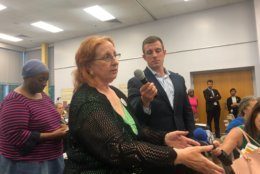 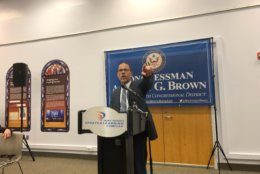 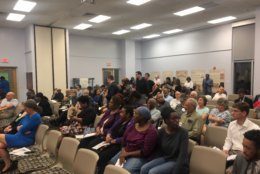 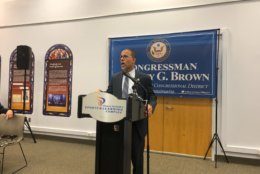 Share on Facebook. Share on Twitter. Share via email. Print.
At a town hall meeting in Prince George’s County, Maryland Wednesday evening, residents packed a room near FedEx field to speak out against a proposal to bring toll lanes to portions of the Capital Beltway and Interstate 270.

The meeting, held at Wayne K. Curry Sports and Learning Center in Landover, was hosted by Rep. Anthony Brown, a Democrat from Prince George’s County.

“I am taking the position that we really should not be tolling our highways in Maryland,” Brown said.

Maryland Gov. Larry Hogan’s administration believes the toll lane option would help alleviate “soul-crushing” traffic which residents along the two busy roads encounter on a daily basis. To make the project a reality, the state would enlist a public-private partnership to build and operate the lanes.

Brown said other avenues should be explored, including building up Metro and expanding the Purple Line over the Woodrow Wilson Bridge.

Other speakers included Tom Hucker, a member of neighboring Montgomery County’s county council, who also believes other options should be explored before toll lanes are employed.

Among the concerns expressed by those in attendance are the 1,500 properties along both highways that would be affected and the 34 homes claimed to make room for construction.

Sherry James, of Landover, said the communities impacted should be brought into the conversation.

“We are never ever, ever, asked, ‘What do we feel? What do we want?’ Stuff is pushed up on us,” James said.

Dave Dorsch said toll lanes shouldn’t be a consideration since the state collects tax revenue on other things, such as gas.

County transportation officials also spoke to the audience about the options presented by the state and encouraged them to weigh in on the project, whether against or for it.