A bumpy and damaged stretch of the Baltimore-Washington Parkway in Laurel, Maryland, remains a major problem for drivers even after the speed limit was lowered to make things safer. See photos and video.
Listen now to WTOP News WTOP.com | Alexa | Google Home | WTOP App | 103.5 FM

A bumpy and damaged stretch of the Baltimore-Washington Parkway in Laurel, Maryland, remains a major problem for drivers even after the speed limit was lowered to make things safer.

Earlier this month, the National Park Service said it was reducing the parkway’s speed limit from 55 mph to 40 mph between Maryland routes 197 and 32.

However, helicopter footage from Monday morning showed the conditions may be worse than they have ever been.

“It’s just an absolute nightmare,” said Brad Freitas, a helicopter photojournalist with NBC Washington. “It is a field of potholes — some the size of small cars and others as deep as probably about a foot.” 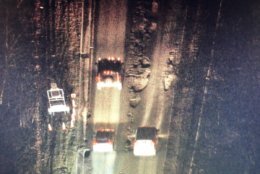 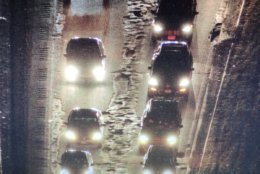 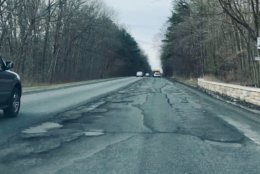 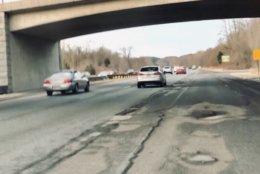 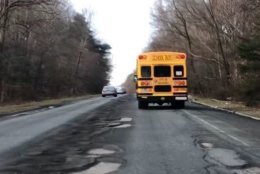 Driving through that section of the parkway, especially in the southbound lanes, feels like an off-road expedition.

Tires slam up and down as you navigate around huge potholes, and you need to slow down significantly to avoid damaging your vehicle.

The winter weather has taken an especially harsh toll on the parkway this year, and it’s been a challenge for crews to keep up their efforts patching up potholes and fixing other deteriorated areas.

“Every day that conditions allow, we have workers out on the parkway working to improve conditions,” said National Park Service spokesman Jonathan Shafer.

Fortunately, a long-term fix is in the works, the park service said. It’s part of a multiphase initiative to repave all 18 miles of the parkway.

“We had previously planned to do the work this fall,” Shafer said. “We’re doing what we can now in order to speed that work up so we can start the road repairs as soon as we can.”

Still, drivers are urged to be patient — the road will not get fixed overnight.

“In order to do the repairs in a way that’s actually going to last, we’re going to need to wait until temperatures rise and we’re able to resurface the road in a permanent way,” said Shafer.