“He’s entered a plea of not guilty and we’re in discussions with the state about next steps,” defense attorney Mark Schamel told reporters after the hearing. “We believe he should be released on some conditions while the case is further investigated by both the prosecution and defense.”

Macklin was on duty, in uniform and a marked cruiser when he allegedly pulled over a woman, around 1 a.m. Thursday, on University Boulevard in Langley Park.

Charging documents released Tuesday say as Macklin conducted the traffic stop of the woman, he “attempted to touch her breast,” then “ordered her to drive behind a nearby store.”

While behind the store, Macklin allegedly grabbed her and forced her to perform a sex act, “then said he wanted to have sex with her.”

Soon, a person the woman had called previously, arrived at the scene.

Witness interviews and video evidence supported the victim’s story, according to the charging document.

Macklin, a six-year veteran of the force, is charged with first- and second-degree rape, perverted practice, second-degree assault and fourth-degree sexual contact.

In the Monday news conference announcing the arrest, Police Chief Hank Stawinski said investigators believe there may be more victims. 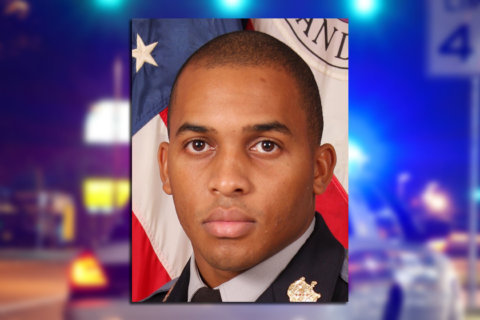