WASHINGTON — The Prince George’s County police officer involved in the fatal Monday shooting of a vehicle break-in suspect is a 10-year veteran of the department.

Cpl. Joseph Keifline works with the Bureau of Patrol. He’s on administrative leave in the wake of the shooting.

This is after a witness says Alvarez fired his gun at a woman two weeks ago, though detectives are still working to verify that account.

The incident, some of which was captured on video below, where three gunshots can be heard, started shortly before 7:30 a.m. in the 3300 block of Huntley Square Drive.

Police say that when officers arrived, they tried to talk to Alvarez, but he ran across the street to Brinkley Road, tossed two license plates he had stolen earlier, and entered an apartment building.

Officers found him hiding in a laundry room and told Alvarez to surrender.

Instead, police say he pulled a gun from his waistband.

One of the officers, not identified, grabbed the gun in an effort to stop Alvarez from pointing it at anyone.

Alvarez fired twice, causing “significant injuries” to the hand of the officer trying to stop him.

Keifline returned fire once, striking Alvarez, who was pronounced dead at the scene.

Police Chief Hank Stawinski said “All that happened in the course of about a second.”

He added that the officer who grabbed at the gun “likely [saved] the lives of one or more officers.” 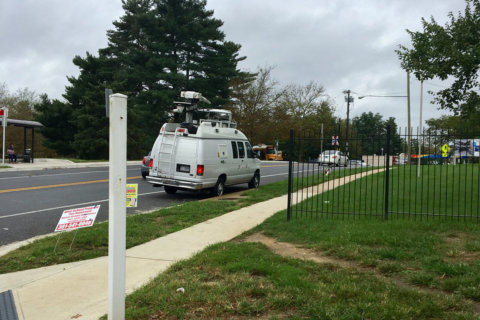