At least five people were injured, including two children, after a cement truck overturned onto a car in a crash on Indian Head Highway in Fort Washington, Maryland.
Listen now to WTOP News WTOP.com | Alexa | Google Home | WTOP App | 103.5 FM
(1/2) 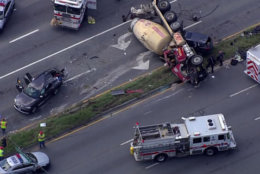 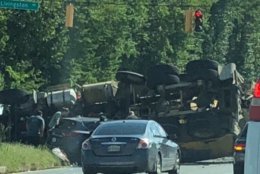 WASHINGTON — At least five people were injured, including two children, after a cement truck overturned onto a car in a crash on Indian Head Highway in Fort Washington, Maryland.

Two adults were extricated and taken by helicopter to nearby trauma centers. At least one had life-threatening injuries. A third adult and two children were treated at the scene.

The accident, which shut down southbound lanes Wednesday night, occurred near the highway’s intersection with Swan Creek Road East.

After lanes were closed for some time, they were reopened before 11 p.m.

The closure strained the nearby road network in Prince George’s County during the afternoon rush hour. Long traffic jams formed on Oxon Hill Road, Piscataway Road and portions of Livingston Road. Slower traffic was observed late into the evening on Route 301 and Route 5 from Camp Springs to Brandywine as well.

Man dead after hit-and-run on US-50