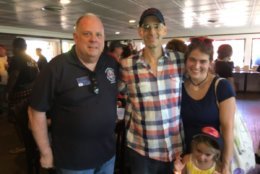 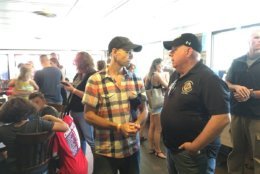 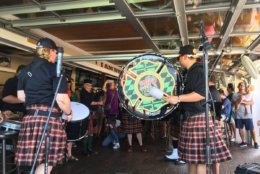 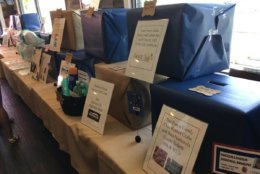 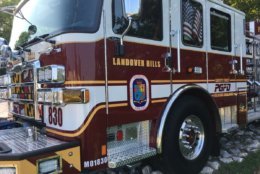 WASHINGTON — The Pier Oyster Bar and Grill in Edgewater, Maryland, was packed with family, coworkers and others who wanted to support Sunday’s fundraiser for a Prince George’s County firefighter battling stage 4 colon cancer.

Jesse McCullough, who is assigned to the Landover Hills Fire and EMS Station, had been diagnosed with colon cancer in January 2017. He is the same firefighter who rescued a dog from freezing waters in Hyattsville, Maryland, in December 2017.

McCullough attended the event and tells WTOP that a few things keep him in a positive frame of mind.

“One is my beautiful wife and my lovely daughters. It’s so important to recognize how blessed I am when I come home and just get to be with them,” he said. “Secondly, I would say I’ve never thrown myself a pity party. It’s easy to do. But I love my job so much that going to work just really kept me positive, and helping others no matter what is going on with me.”

He says the biggest thing that helped him after his diagnosis is the fact that he gets to tell his wife and daughters he loves them every day.

McCullough also told WTOP that even if they don’t get the desired outcome, “most people aren’t fortunate enough to say that they died doing what they loved. If I do, unfortunately, end up dying, I have the honor of saying that, and that’s not something to be taken lightly.”

“I’ve gone through a similar thing myself with cancer for 18 months, and I just wanted to be here to give him some emotional support,” Hogan told WTOP.

Lt. Erica Hasan told NBC Washington that McCullough is undergoing chemo and that his cancer has progressed. Hasan and other colleagues hope the fundraiser helps defray some of McCullough’s treatment expenses and to lift some of the financial burden from his family. There’s also a GoFundMe page seeking to raise $35,000 for his treatment.

Occupational cancer deaths claim these first responders more than any other firefighter line-of-duty deaths across the nation, according to the International Association of Firefighters. A large percentage of names added to the IAFF’s national Firefighters Memorial since 2002, about 60 percent, have been diagnosed with work-related cancers.

A study of 30,000 firefighters in Chicago, Philadelphia and San Francisco found that firefighters are at an increased risk for certain cancers than most of the U.S. population.

Maryland Sen. Chris Van Hollen has announced passage of $2 million that will be used to help fund the Firefighter Cancer Registry Act.

“That’s going to be a big help, because … we just haven’t had the data to go to and to show the significance,” Prince George’s County Fire and EMS Chief Benjamin Barksdale said to NBC Washington.

“Firefighters in Maryland and across the country put their lives on the line every day to protect our communities,” Sen. Van Hollen said in a news release.

“We know that cancer is an occupational hazard for firefighters — but this new funding will help lay the foundation to better understand the cancer risk they face and help inform how to reduce these risks.”