A teacher hiring fair in Prince George's County aims to get 800 new teachers — all of them certified or newly graduated and eligible for certification — by the start of the next school year. WTOP talks to some of the newly hired teachers about their passions and priorities.
Listen now to WTOP News WTOP.com | Alexa | Google Home | WTOP App | 103.5 FM
(1/4) 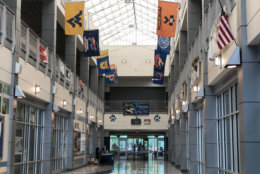 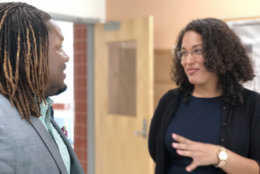 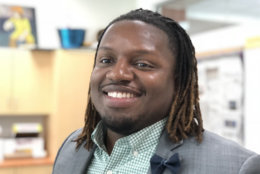 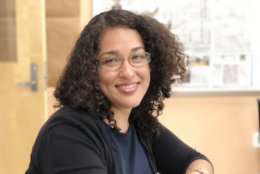 A teacher hiring fair was being held with the goal of getting 800 new teachers — all of them certified or newly graduated and eligible for certification — by the start of the next school year.

Upon entering the school, teachers signed in and then were interviewed by principals.

Marqwan Jermaine Sirls likened the interviews to speed dating, with teachers moving from one table to the next to chat with principals. He said he found a nearly instant rapport with the principal of Bowie High School. “She was very serious and I could feel that she cares a lot about what she does,” he said.

Sirls, who is African-American, said his own education helped give him the confidence to achieve his goals. As a result of his interview, he’s been hired to teach English at Bowie High School.

He said he’s eager “to provide a good, rigorous education for people who look like me and I’m looking forward to be a part of that movement, of high expectations, a good education and to give our kids the best shot at becoming whoever they need to be.”

Mary Perez will teach Spanish at Benjamin Tasker Middle School also in Bowie. She was recruited from Puerto Rico. She’s certified to teach and is working on a master’s degree in public health with a concentration in epidemiology.

From the first day, she said she wants to immerse her students in Spanish. “I would like to give students the opportunity to go to Puerto Rico, to organize an excursion,” she said. When she mentioned her idea to the principal, the two clicked right away.

Perez said while she’s bilingual, she’s still a little hesitant when speaking and says that will inform the way she teaches.

“I know how difficult it is to learn a second language. I can read in English, I can write in English, but it is still a bit difficult to speak it,” she said.

While the Prince George’s County school system has been the subject of a state audit — and controversy remains over the exit of outgoing CEO Kevin Maxwell — the emphasis at Thursday’s event was on finding the best teaching candidates for what education experts say is a critical and demanding job.

Pearl Harmon is the director of human resources, operations and staffing, and it’s her job to make sure the school system gets the 800 teacher candidates it’s looking for.

She took a seat at a desk inside a classroom, getting a chance to sit down after the morning’s flurry of activity. “It’s a well-oiled machine at this point,” she said, explaining that candidates had been prescreened and their certification to teach already verified.

Harmon is aware of the negative headlines regarding the record of the outgoing school chief.

“We have a dynamite group of educators doing their very best every single day,” she said. She pointed to the fact that Prince George’s is one of the largest school systems in the state and has a number of schools described as “high-needs”.

She said her advice to new teachers is to draw on the passion and the drive that brought them to education. “Keep that at the forefront of your mind each and every moment that you’re engaging with the kids,” she said.

She acknowledged the challenges teachers face. “It can get hairy sometimes,” she said. But kids are depending on their teachers. “They need you to provide guidance and support,” she added.

She also advised parents to try to find the time to get to know their school and their child’s teachers. “Spend some time building the relationship” she said.