UPPER MARLBORO, Md. — After firing up the onboard computer, the burly and bearded Minnesota native yanked the pull starter cable on his 6-horsepower Tohatsu motor.

He twisted the tiller-throttle into gear, lurching the custom-built 16-foot long, 8-foot wide cataraft boat up the Patuxent River and away from the pier at Jackson’s Landing in Upper Marlboro, Maryland. 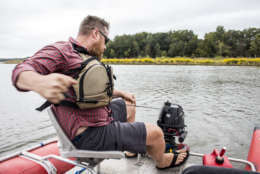 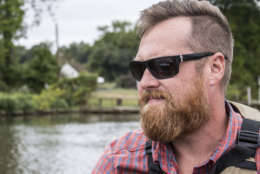 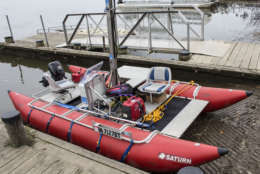 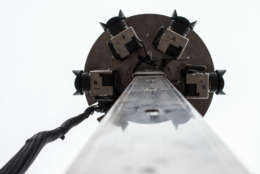 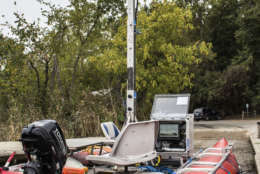 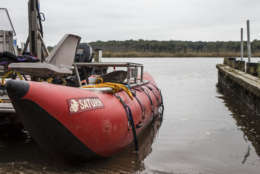 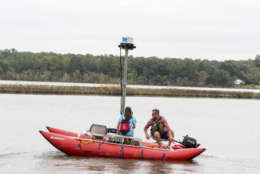 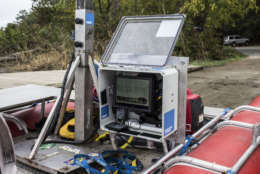 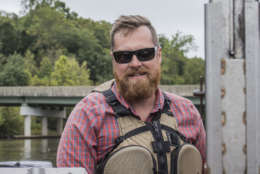 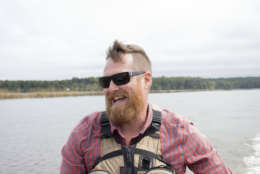 “If you listen really close, you can hear it.”

Abrahamsen pointed up at the six Canon cameras circularly mounted to a 13-foot stainless steel tower extending from the center of the boat. He designed a computer to track GPS and, as the boat travels, simultaneously shoot six cameras every 40 feet.

River mapping went on as planned Sept. 26 for Abrahamsen.

“If we map all day,” he said, the system records approximately 4,800 panoramic images. He then uses the snapshots to create virtual tours.

In collaboration with the Chesapeake Conservancy, Terrain 360 is making virtual riverview tours for the John Smith Chesapeake National Historic Trail — the Patuxent is the 11th waterway mapped to date in the region.

The Google Street View-esque tours can be useful for adventurers and nature-goers, but also with an eye toward conservation.

Virtual tours are an innovative way to connect with nature, Jody Couser, spokeswoman for the Conservancy, wrote in an email to the University of Maryland’s Capital News Service.

“Nurturing and cultivating that connection with the public is really important to inspire people to care about the health of the Chesapeake and find ways they can make a difference.”

The James River was the first waterway mapped by Terrain 360 and James River Association conservation manager Justin Doyle said the virtual tours are a way to connect people to the river and the environmental goals associated with it.

The Richmond, Virginia-based Terrain 360’s images could be pivotal in documenting environmental changes, like erosion.

If we go back to the same waterways to map them years later, Abrahamsen said, “it will be tangible evidence of change.”

In 2018 he hopes to remap the James River, which he photographed in 2014 — a milestone for Abrahamsen, as it was the first time his operation took to the water, having focused on hiking trails for about two years.

He said he looks forward to seeing “how the river has eroded the shoreline or created new islands.”

Meanwhile, Doyle looks forward to using the 2014 images as a baseline for the James’ riparian buffers — wooded areas immediately adjacent to the river — to compare with future river conditions.

The buffers, he explained, “provide critical habitat for numerous species and absorb pollution.”

Couser said that the Conservancy sees the riverview tours serving a supplemental role, pairing the tours with their High Resolution Land Cover Project, a mathematical approach to documenting environmental change.

Abrahamsen said he considered the potential environmental conservation impact from the start.

“From the beginning,” he said, “I wanted the ability to time travel.”

Terrain 360 mapped the Potomac River in 2016; the tour is available online and serves as a window into the past.

Each click of a computer mouse takes the viewer 40 feet down the river:

Tree-covered hills and sheer-rock-face riverbanks flank the broad, blue waters of the Potomac River as it twists and turns from the mountains of West Virginia to the tidal waters of Southern Maryland.

Nature-goers can use the Chesapeake Conservancy’s riverview virtual tours “to prepare for a boating trip or park visit, getting a sense of the land and water, boat ramps and access sites before (they) go,” Couser said.

The James River Association hosts an endurance paddle race, The James River Rundown, every year. They provide the contestants maps, but encourage paddlers to check the 360 virtual tours so that they can pick their lines of passage down the river and its class three and four rapids, Doyle said.

Justin Mando, an assistant professor of English and science writing at Millersville University in Pennsylvania, could speak to the virtual tours’ effectiveness for outdoorsmen and adventurists.

Mando said he fishes a lot, and recently moved to the Lancaster County, Pennsylvania, area. He doesn’t know the Susquehanna River intimately yet. The tour, he said, is “pretty good for scouting out locations to go fishing.”

He uses Google Maps to mark spots he’s fished, but he said, “it’s tough to figure out access spots with Google Maps.”

Mando added, “(the tour) made my own experience on the river better.”

Terrain 360 and the Chesapeake Conservancy have mapped the following rivers:
— The Elk
— The James
— The Nanticoke
— The Northeast
— The Patapsco
— The Potomac
— The Rappahannock
— The Sassafras
— The Susquehanna
— The York
— The Patuxent

View the 360 tours of waterways.