Why Prince George’s Co.’s top prosecutor wants to be next county exec

Alsobrooks, Prince George’s County top prosecutor, told WTOP in an interview that she is joining the race to replace current County Executive Rushern Baker, who can’t run again because of term limits.

In the interview with WTOP, Alsobrooks said her three top issues:

Alsobrooks said she wants to do more to engage families and invest in the neighborhood school concept.

“Education is the absolute priority. Investing in children and investing in their families will create a more prosperous Prince George’s (County),” she said.

Alsobrooks is currently in her second term as the county’s top prosecutor. She said if she’s elected to become the next county executive, she will continue the fight against child abuse and domestic violence, which she has been focused on since becoming the county’s first full-time domestic-violence prosecutor in 1997.

“The work we did (in the state’s attorney’s office) with child abuse and domestic violence is centered on families, and what we will do in the county executive office is to promote the same idea … that education is paramount,” she said.

Alsobrooks said her years as the county’s top prosecutor has prepared her for the county executive position.

“This will give me the opportunity to work on a greater level on the things I’ve already been doing,” she said. “So this is not new. Much of what I’m focusing on as a county executive platform is building up the things we actually did in the state’s attorney’s office. This is not new work.”

Being a lifelong resident of the county, which now numbers more than 900,000 residents, also has given her the chance to really get to know the people of the community and understand the issues that concern them, she said.

Alsobrooks said the edge she has over her possible opponents — including Sen. Anthony Muse — is that she already has executive experience.

In 2003, she was appointed to lead the county’s revenue authority, which is responsible for collecting revenue generated from parking facilities, a position she held for seven years. She’s been the county’s top prosecutor since 2010.

“So executive experience is one of the real divides between us, because I’ve actually done this work before,” she said.

The Maryland state primary is next June. 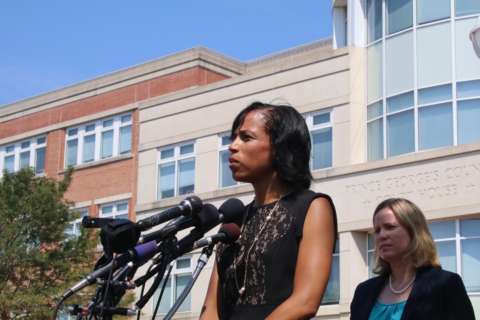